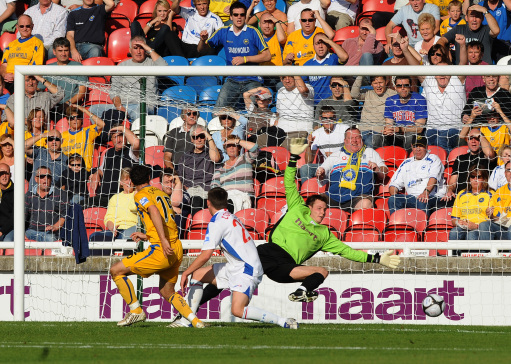 It has come to light that tragic Rushden and Diamonds goalkeeper Dale Roberts, who hanged himself on Monday evening, may have committed suicide after learning that his fiancee cheated on him with his former teammate Paul Terry – older brother of John.

The Daily Mail are alleging that Roberts (who began his career with Nottingham Forest) and his partner, Lindsay Cowan, separated in May after it emerged that Terry slept with her whilst he was staying at the couple’s home.

At the time of the affair, Roberts apparently told the local press:

“It’s true, she told me she’d been seeing Paul. We’ve split up. I’m trying to get my head around it all, it’s only just happened. I’m a bit messed up.

“It is bad enough she’s done it at all but the fact that it is with him, one of my teammates, makes it that much harder to bear.”

The understandably ‘distraught’ Roberts then refused to play alongside Terry at Rushden, so the defender was duly released to join Darlington two months later – though it seems that the England C stopper just couldn’t come to terms with the emotional upheaval he was put through.

Before anyone gets swept away in blind ‘Terry gene’ apoplexy, it’s worth noting that Roberts’ death is not the fault of his fiancee nor is the fault of Paul Terry. Affairs, philandering and separations happen every day all across the world and only in very isolated cases do they result in suicide.