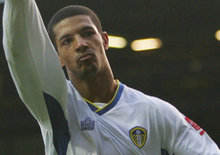 “He tries to chat with you during the game. There were times on Saturday when he was complimenting me on my game saying things like ‘good header’ and ‘nice tackle’.
“I didn’t know whether he was winding me up or trying to put me off but it was very strange. I’ve never been complimented by a striker – especially during a game.”
Millwall defender Zak Whitbread reveals that Jermaine Beckford (pictured) admired his nice tackle, during the first leg of the Leeds v Millwall League One play-off on Saturday. Titter, tee-hee etc. [@ The Sun]