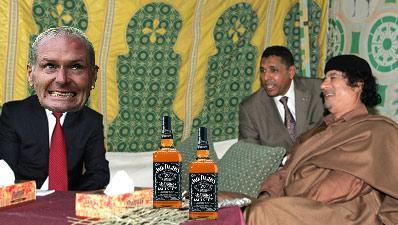 You’ll be glad to know that Paul Gascoigne is not dead…yet, and that he’s also been reminiscing with Piers Morgan (for the ruddy-faced bounder’s tear-milking Life Stories television show) about the time he visited Libya, snooted enough fluff to down a Stegosaurus and then took the fruits of Colonel Gaddafi’s loins out on the lash around gay Tripoli:

“I went to Libya when I played for Middlesbrough and took Gaddafi’s two sons out and got them absolutely lamped. I also signed this thing in his compound. I think it was a bomb!

“At my worst I had 16 lines of coke a day. I was on four bottles of whisky a day for three months. I mean, it took two bottles just to stop the shakes.”

Gazza also regaled the tale of the time he was allowed to take the controls of the private jet carrying England’s 1990 World Cup squad to Naples, thus putting them and possibly the rest of human kind in mortal danger:

“I asked if I could sit in the cockpit. Then I asked the pilot if I could have a go at the controls. I gave it a turn and I must have sent the jet three miles off track.”

All jest and hyperbole aside, we all could have died that day.

You can’t help but feel that the most worrying aspect about all of Gascoigne’s hazy, addled mumblings is that absolutely none of it is the least bit surprising in any way, shape or form.