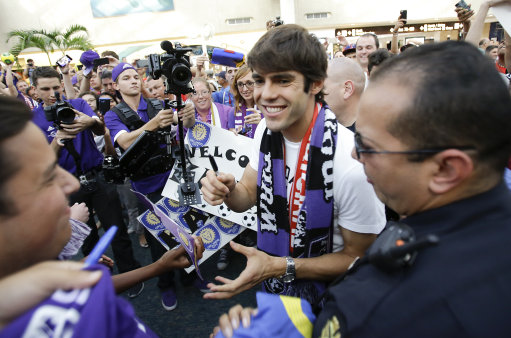 Kaka: Positively rolling in it

As is customary, the MLS Players Union have publicly released the 2014 salaries of each and every player in the league, with the usual suspects topping the list as expected.

However, far above the likes of Clint Dempsey, Jermain Defoe, Tim Cahill, Landon Donovan, Robbie Keane and Thierry Henry comes the MLS’ new highest earner, Kaka, who is raking in a whopping great $7.17million-per-annum after signing with Orlando City back in July.

The 32-year-old Brazilian was then immediately loaned out to former club Sao Paulo for six months as Orlando don’t actually join the MLS until the 2015 season starts next March – meaning, in short, that he’s currently the MLS’s highest earning player despite NOT playing for a team that isn’t actually in the MLS yet.

Nice work if you can get it, we suppose.

Anyway,  the top 10 MLS contracts are as followed:

The full list is available here should you wish to peruse it.

This is because the vast majority of his wages are currently being picked up by A-League side Melbourne City, where the Spanish striker is spending the next few months on loan before, like Orlando, NYCFC officially enter MLS at the start of next season.