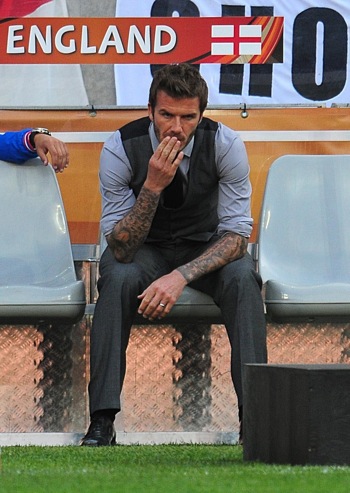 David Beckham was told by doctors that he’d have to wait until October 2010 to make his comeback from the Achilles injury he suffered earlier this year. But Becks being the stubborn sod that he is, it looks like he’ll be back in action for LA Galaxy sooner than expected. I only hope he doesn’t kid himself that he’s fully fit.

This just in from the Galaxy’s official site:

“The England international presses on with his grueling rehabilitation from a torn left Achilles tendon suffered March 14 while playing for AC Milan, and the 35-year-old is optimistic he can be playing again sometime in the next few weeks. Doctors originally set a date of Oct. 1 for Beckham’s return, but true to form, Beckham has his eyes set on a return to action this month.

‘The doctors’ original date was Oct. 1, but I always kind of said I want to be ready before then. I’ll keep my fingers crossed and hopefully will play in part of the game here against Columbus. I’ll be on the bench, and hopefully I’ll get on the field for 15-20 minutes. That’s what I’m looking at.’

Beckham participated in his first full training session with the club on Aug. 11 and has gradually increased his work load, joining in with the rest of the squad in more and more of the training exercises. He said he is feeling better and better, although he admitted his fitness level ‘is like being in preseason.’

‘At the moment, you have good days and you have bad days,’ he said.

‘You wake up with a lot more pain in your body when you’re in preseason. I have to do it because I need to get as close to match fitness as possible.

‘It’s a bit difficult because when you don’t play in games; that’s where you get the real fitness from. But I’m doing what I can in the gym and what I can on the field, just trying to get strength back in my leg.

‘It kind of kicks you up the backside when you realize you can’t do certain things. Working out was something I’ve done for the last 25 years, and to not being able to do it was tough for me.'”

Although MLS is improving, Beckham can afford to rush back a little sooner than he might if he played for a club in a big European league. Whatever, it will be great to see him back on the pitch.