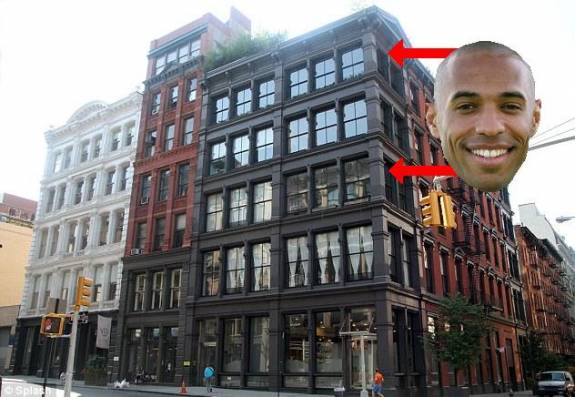 New York Red Bulls striker Thierry Henry has splashed out the lion’s share of £10 million on a flash penthouse in New York’s uber-trendy SoHo district – home to stars such as Rick Moranis and Huey Lewis (of ‘The News’ fame).

According to the Daily Mail, Henry payed an initial $9 million for the top two floors of the building and also forked out a further $6 million to purchase the apartment on the floor below his penthouse – which he plans to ‘knock-through’ once the current owner moves out.

The luxury pad apparently boasts an interior bamboo courtyard (now I’m not exactly sure what a ‘bamboo courtyard’ is, but at that price I think I’d want two), a 72 inch flat screen television and media room with its own wet bar, 17ft floor-to-ceiling windows and a balcony that wraps around the two bedrooms.

One question Thierry, does it have an extender?