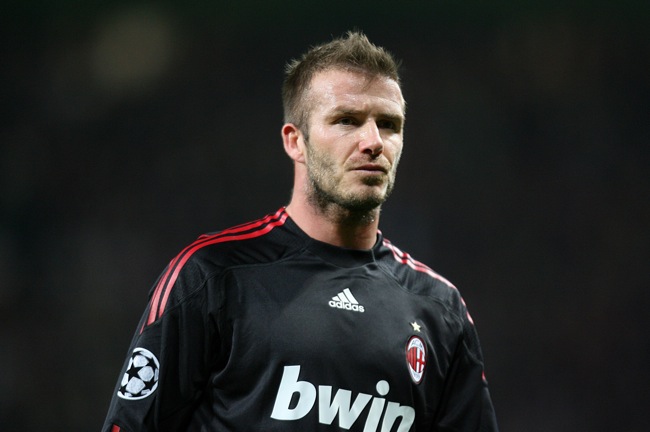 Bid-backer extraordinaire, ovation milker par excellence, newly-crowned BBC ‘Greatest Single Entity in the Known Universe’ and part-time LA Galaxy quarterback David Beckham has begun touting for a return to Europe on loan during the MLS off-season in a bid to win back his place in the England squad – that’s right, never give up hope Becksy, NEVER!

Speaking after being bestowed with a Beeb ‘lifetime acheivement’ award on Saturday night, Beckham (who, incidentally, attended the ceremony dressed as himself but from 15 years ago) put out the feelers:

“I won’t be going back to AC Milan this time because is not possible to go onto the roster for such a short length of time, but I will be going back somewhere as I want to keep myself fit and keep myself in with a chance of getting called up for England again.

“To do that, I have to be somewhere, so fingers crossed I can sort something out.”

Becks also mentioned the Premier League in passing, but admitted that a certain vow he made in the past may restrict his English options:

“I have always missed playing in the Premier League since I left it almost eight years ago.

“It is a great league and one of the most competitive in the world. Maybe one day I will come back here but I have always said that it will only be for Manchester United. I am not holding my breath on that one, but we will have to wait and see.

“But definitely not Preston [where United farmed him out on loan as a teenager, it’s too cold up there!”

Any guesses? I’ve got a hankering for Blackburn, given their newly-found ‘Hollywood’ tendencies.