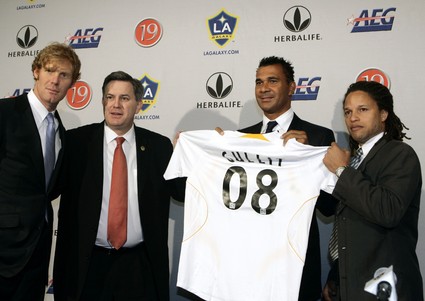 Well that went well. Ruud Gullit’s Hollywood adventure lasted all of nine months, in which time he again proved that great players don’t necessarily make great managers.
Gullit resigned – was he pushed? – and has been replaced temporarily by assistant coach Cobi Jones (the one who looks like an old lesbian).

Galaxy are struggling to make the play-offs after a winless streak of seven games. As part of the club’s bid to turn its season around before its too late, general manager Alexi Lalas has also been released.
Gullit was reportedly unhappy with the MLS salary cap. The Dutchman also admitted he struggled to settle in LA: “In truth, it has proved a lot more difficult than I anticipated for my family to settle in the area and the club has been very supportive and understanding of my decision.”
Maybe Gullit also has to face up to the fact he’s not a very good coach.