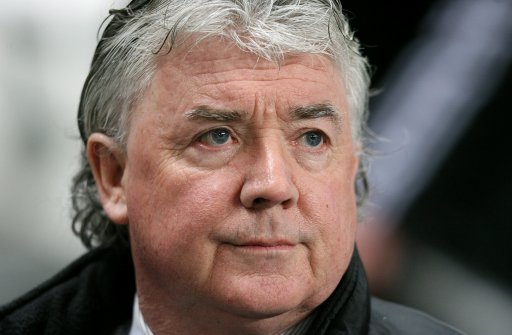 Having single-handedly turned Newcastle back into a laughing stock after the club spent two or three years doing their utmost to see off all their humble pie and rebuild their reputation from the Championship up, it’s unsurprising that Joe Kinnear’s appointment hasn’t gone down well on Tyneside.

Since arriving a few weeks ago, Kinnear has spouted the most inane mouth chutney imaginable to the press, erroneously embellishing his CV at every turn and doing his usual trick of mispronouncing all the tricky foreign-sounding names in Newcastle’s squad (Yohan Kebab, etc) – largely because he’s a bit dim and a bit ignorant.

It’s fair to say that Alan Pardew has not been overly impressed with Kinnear’s impact so far, admitting that he has reprimanded his new “director of football” (apologies, but we’ve just got to use inverted commas there) for his slap-dash approach to paying the Newcastle players the slightest bit of respect.

“Some of the things Joe said he has apologised for, especially getting the names wrong of our players. That needs to be corrected because there is a certain respect needed there.

“I spoke to one or two players and my staff here and made them very aware of where the position lies. I’m very open-minded to Joe’s position. I will take it as I see it.

“People who work with me will know that I am my own man. I will manage this football club and manage this team to the best of my ability.”

Don’t you just get the ominous feeling that something’s going to give?