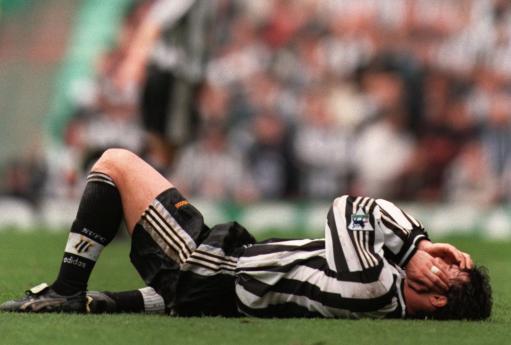 Keith Gillespie’s new autobiography, “How Not To Be A Football Millionaire”, is being serialised in the Daily Mirror this week and today’s excerpt features a warm tale of the time the jinky Newcastle winger, on a team-bonding jaunt to Dublin, found himself waking up in a hospital bed with just the dimmest recollection of having pissed of Alan Shearer by pinging bottle tops at him in a bar…

“I opened my eyes to a world of confusion. No idea where I am. No idea how I got here.

Eyes open again. This time, it’s a little clearer. I see people in white coats. I hear Irish voices but it’s like I’m trapped in that Talking Heads song, the one where the lyrics are mostly questions: “You may ask yourself, well, how did I get here?”

Slowly, my memory is decoding. Little things make sense. The Irish voices? I’m in Dublin, with my Newcastle team-mates, for a bonding exercise. That’s why Steve Howey is standing there.

Wait. Why is Steve Howey in this strange place with the humming and the beeping and the people with white coats?

I sigh, and decide all I want to do is sleep. And the kind people in the hospital want to keep me here for the night. The only problem is, they insist on waking me up every two hours.

“We have to be careful sir,” explained the doctor. “With head injuries, you can never be too sure.”

I’m scared, and don’t feel like sleeping for a while.

For all the troubles on the pitch at Newcastle at this time, we retained a healthy social life and, at the end of February, the jaunt to Dublin was organised.

The road to the confusion of the hospital bed started in the Teesside Airport bar. We’d drawn at Everton on the Saturday and travelled the next morning. The gaffer had sanctioned the trip, but decided against attending.

I recall how the day kicked off, but need the help of others to piece together the rest.

We were staying in a decent hotel close to Dublin city centre, and went straight from there to Cafe En Seine, an upmarket bar, for an early drink.

I was in giddy form, and started flicking bottle tops in the direction of other players. Alan Shearer got struck by a couple and was getting wound up, which I found enjoyable, so I made him my target and tension brewed.

It came to a head when I clumsily knocked some cutlery off the table. “F**king pick it up,” Shearer snapped, but the lounge girl was already over, clearing up the mess.

I thought he was talking to me like a small boy, and shouted back.

Red mist descended. We had a bit of a row and, for some reason, I asked him if he wanted to take it outside.

Cafe En Seine is a long, narrow bar, so it was quite a walk to the front door. There was no discussion en route. I was mulling over my next move.

We emerged onto a busy street, where Sunday afternoon shoppers were going about their business. It didn’t deter me from the battle-plan. I took a swing at Shearer, but I was punch-drunk and inaccurate.

He responded with a blow that sent me flying backwards against a plant pot. I cracked my head and entered the blackout zone.

The next thing I remember is the view from the hospital bed.

There was no potential for long-term damage, so I was discharged, and returned to the hotel to find that all the lads were out at a function.

The peace and quiet of my hotel room was disturbed by a knock on the door.

An unfamiliar journalist was standing there. “Is it true you had a fight with Shearer?” he asked.

I slammed the door in his face. A few minutes later, there was another knock. This time, it was Shearer and Rob Lee. Peace was restored before they had even come inside.

We ended up laughing about it, although we knew a media storm was inevitable. Which was fair enough, really.

What else do you expect when the England captain knocks out a team-mate in broad daylight?”

Note to self: don’t ever flick bottle tops at Alan Shearer.

As for Gillespie, yesterday’s excerpt saw the Irish winger lament how his gambling addiction ended up costing his £7.2million which forced him to declare bankruptcy a couple of years ago.