So, Steven Taylor just sent this Tweet to four of his Newcastle teammates – all of whom happen to be black gentlemen: Massadio Haidara, Moussa Sissoko, Papiss Cisse and Vurnon Anita… 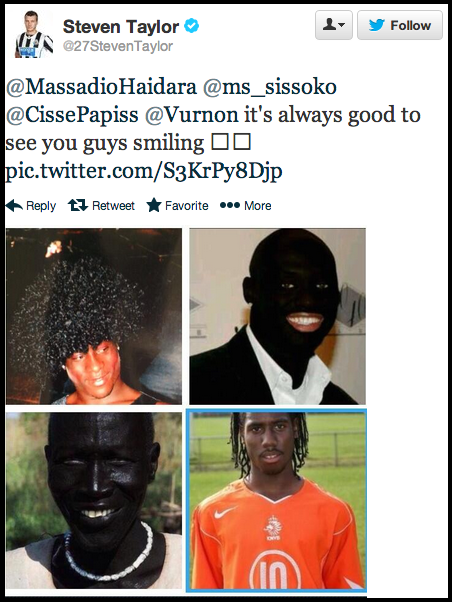 For what it’s worth, Haidara responded instantly to the criticism being flung Taylor’s way, telling his followers that the group had previously been joking in the dressing room and that it was all just…you guessed it…banter.

Apparently it was all in response to Haidara ribbing Taylor over a photo of him looking baffled while trying to learn French.

@27StevenTaylor Is Just Bander with Papiss , Moussa , Vurn’ and Me . He joke with me 2 min before .

All completely innocuous it would be reasonable to assume, though perhaps a little misguided from Taylor if there were any blame to be apportioned.

Cue, hundreds of Retweets and comments from Twitter users instantly becoming incandescently offended on behalf of the four black players in question and bombarding Taylor with messages of the “this is not okay” variety.

Case closed. We’re supremely confident that this is the last we’re going to hear of this.