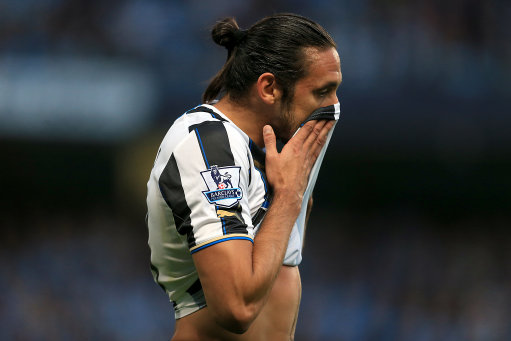 Newcastle United midfielder Jonas Gutierrez has been inundated with messages of support from teammates and fellow pros after publicly announcing that he has been diagnosed with testicular cancer.

Gutierrez, who spent the second half of last season on loan at Norwich City, revealed that he is now undergoing treatment in an interview with Argentinian television station TyC Sports – also revealing that Newcastle are apparently unwilling to pay for the winger’s medical bills despite him still being under contract at St. James’ Park.

“I detected a tumour in a testicle. When I confirmed the cancer, I went home crying.

“I came here and I assumed the costs despite having a contract with Newcastle.

“Money is not important. What is important is health. I had to start chemotherapy.

Gutierrez also revealed that he has had his left testicle removed and is now undergoing chemotherapy which has caused his famous long hair to fall out:

“In May 2013, I had a collision with an Arsenal defender and felt a sharp pain in the testicle.

“After several misdiagnoses, the tumour was detected through ultrasound.

“It was hard to find my hair falling out. I did not want to cut it. I wanted to hold on.”

Since he went public with his diagnosis, Gutierrez has received a flood of support from sympathetic players and fans around the world.

I think we can speak on behalf of all Pies’ readers when we say ‘Get well soon, Jonas!’