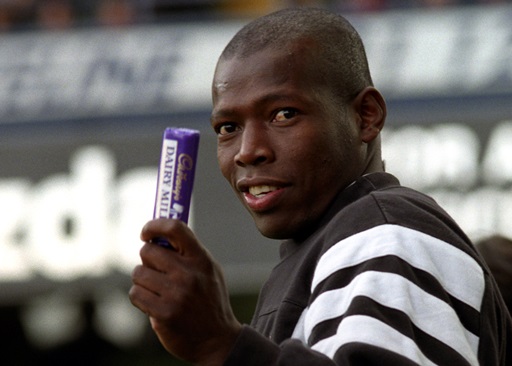 Tino Asprilla with a bar of Dairy Milk – enjoy!

Joining Ronaldinho in the footballer-turned-prophylactic-entrepreneur stakes is one Faustino Asprilla, with the former Parma and Newcastle striker launching his very own line of fruit-flavoured condoms in his native Colombia yesterday.

Asprilla, now 44 and somewhat famed in his homeland for his…ahem…fulsome endowment, has joined a consortium of his friends to launch the new condom range.

“It’s going to be a line of flavoured condoms. Some friends of mine in Medellin came up with the idea, I thought it would be fun to help out.”

“Guava! I’ve always loved guava, because we had a tree outside my house growing up!”

Asprilla also added that his condoms are currently still at the production stage and that he doesn’t know when they’ll be put on the market.

After appearing on the radio, Asprilla later took to Twitter to stress that his project is not about money, but rather about promoting good sexual health in Colombia.

“The main goal for me, really, is to support a campaign to prevent AIDS and teen pregnancies with a line of condoms,” he Tweeted.