Arsenal produced yet another impotent display at St. James’ Park, with a Fabricio Coloccini own-goal giving them victory against 10-man Newcastle. 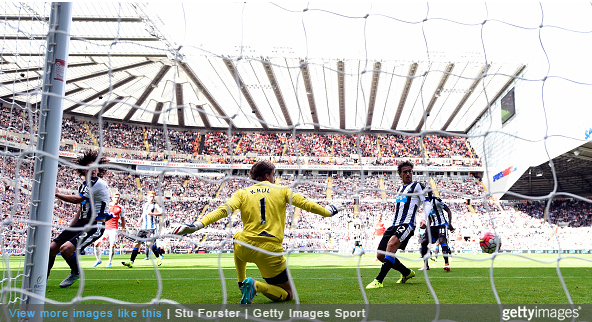 The Gunners lined-up with Theo Walcott replacing Olivier Grioud in attack and Alex Oxlade-Chamberlain in for the injured Mesut Ozil. And it was the visitors who started well.

Walcott had a great chance to open the scoring early on, only for Tim Krul to block the striker’s shot.

The Gunners should have been awarded a penalty early on too, only for ref Andre Marriner to somehow miss a clear foul on Hector Bellerin in the Magpies’ box.

The hosts were physical from the off and on 16 minutes, human ticking-timebomb Aleksander Mitrovic saw red for a nasty high and late challenge on Francis Coquelin

However, Arsenal struggled to make the extra man count and it took until the 52nd minute for the breakthrough to final come. The impressive Oxlade-Chamberlain was the instigator for the Gunners, with his shot deflected into the Newcastle goal by captain Coloccini.

Arsene Wenger brought on Olivier Giroud to try to get a second but once again the north Londoners looked blunt in attack.

However, the Gunners did secure the win which sees them go fifth, albeit with the need for a world-class centre-forward as pressing as ever. As for Steve McClaren’s side, they’ll be buoyed by their strong defensive display but the continuing lack of discipline of summer-signing Mitrovic is an issue which does need addressing by the Magpies’ boss.