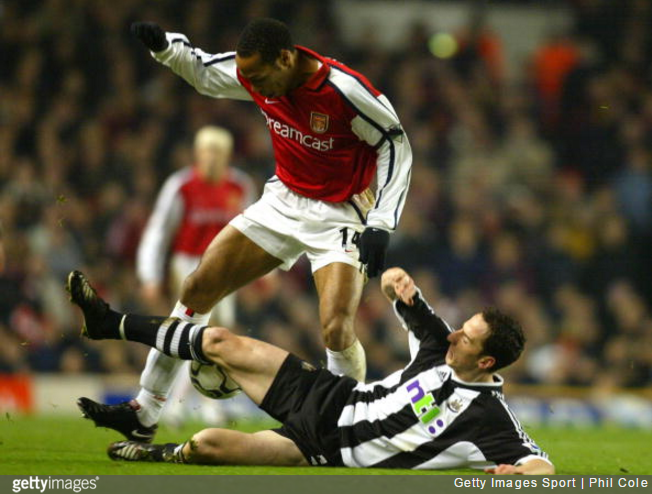 Since last leaving the capital with something to show for their troubles in 1997, by the time their game against Arsenal came around in December of 2001 it had been a whopping 30 matches since Newcastle United last managed to win a match in London.

With that in mind, you can forgive most of the travelling Toon fans for nursing a slight sense of foreboding ahead of their long-haul trip to Highbury.

Sure enough, Arsenal took the lead through Robert Pires just 20 minutes in (after some stunning build-up play from Thierry Henry) to give the visitors that familiar sinking feeling.

However, when Ray Parlour was sent off by referee Graham Poll just before half-time, hopes began to stir that the Magpies might actually be able to nick something.

On 58 minutes, Newcastle manager Bobby Robson sent Lomana Lua Lua and Laurent Robert on for the more prosaic pairing of Nolberto Solano and Robbie Elliot. It was to change the game decisively.

Two minutes after the substitution, Newcastle were level – Andy O’Brien heading home a Lua Lua corner. Just when things were looking up, Newcastle had Craig Bellamy sent off in the 72nd minute for catching Ashley Cole with a loose arm.

With that the two teams were level-pegging again, ten men on each side.

Then, just four minutes from time came the game’s most contentious incident – referee Poll adjudging Sol Campbell to have fouled Robert in the area despite the Arsenal defender appearing to take the ball perfectly cleanly.

Regardless, the resulting spot-kick was converted in trademark emphatic fashion by Alan Shearer, the prolific striker’s first ever goal at Highbury.

Newcastle then firmly exorcised their London demons when Lua Lua sent Robert clear with an inch-perfect through-ball that the French midfielder duly steered past Stuart Taylor to seal the 3-1 win.

The result proved to be little more than a minor blip for the Gunners, who went on to complete the domestic double – their second in four years.

Newcastle finished in a very respectable fourth place in the Premier League, their highest finish since the 1996/97 season.