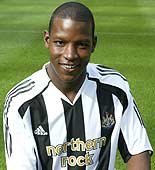 Big Sam Allardyce doesn’t muck about, does he? Just one day after Allardyce was unveiled as Glenn Roeder’s successor at Newcastle United, five players were released by the club: Titus Bramble, Craig Moore, Olivier Bernard, Pavel Srnicek and loan signing Oguchi Onyewu have all been told their contracts will not be renewed.
Bramble had actually done quite well whenever I saw him this season, although you know he’s always capable of making one crucial mistake in a game. Birmingham City, still looking to replace Matthew Upson, are favourites to sign him. Moore, Bernard and Srnicek won’t be missed by the Toon Army. Neither will Onyewu, although I’m surprised that he failed at St James’ – I thought he had the physical attributes to succeed in the Premiership but he never settled. It will be interesting to see where he ends up now.