A humdinger of a Tyne-Wear derby took place at St, James’ Park on Sunday, with both Newcastle United and Sunderland fighting for their Premier League survival.

Not surprisingly, passions were running high during the game, with one member of the Toon Army getting himself into a right pickle away after Aleksandar Mitrović’s 83rd-minute equaliser.

Jermain Defore had opened the scoring for the visitors just before half-time. However, despite being second-best for large periods of the game, Newcastle fought back, with Serb attacker Mitrovic securing a precious point late on. 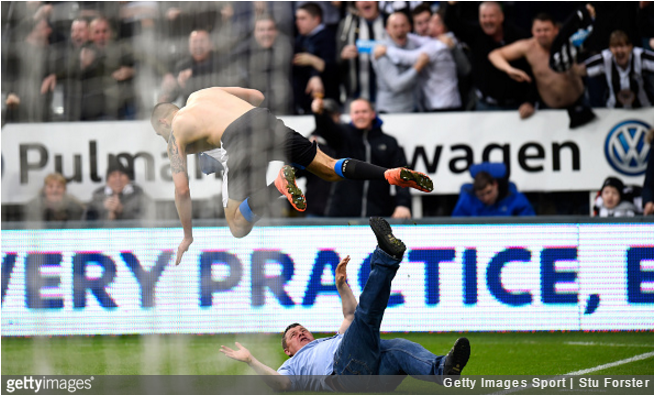 Alas, the striker’s attempted mid-air hug with a celebrating fan was less successful, with the supporter in question landing on his arse…

Celebration of the weekend goes to Mitrovic and this Newcastle fan. pic.twitter.com/PamkbNMC81

At least they did manage to embrace after the initial false start!

The results sees both sides stay in the drop-zone, with Rafa Benitez’ Newcastle 19th on 25 points, one place and one point behind Sam Allardyce’s Black Cats.

Surely they both can’t go down?