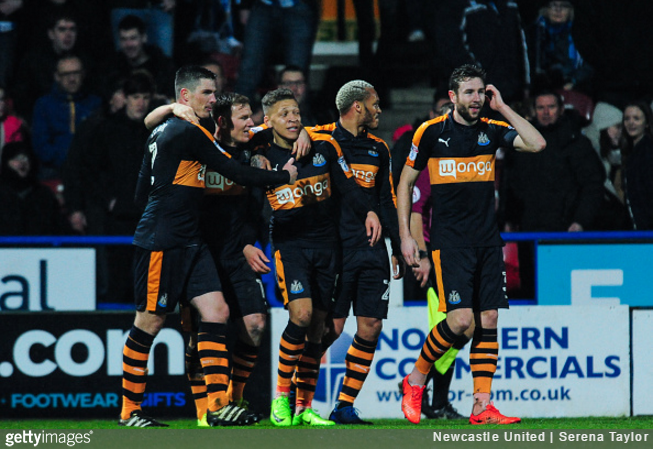 The Newcastle fan who got himself pinched for attempting to invade the pitch during the recent 3-1 win over Huddersfield Town has claimed he simply had no choice but to encroach.

Reece Smailes was charged and subsequently pleaded guilty to entering the playing area when he spilled over the safety barrier following Dwight Gayle’s 91st-minute goal at The John Smith’s Stadium on 4th March.

However, his excuse – the actual one he gave in court – is that he was left with no option other than to run towards the pitch because the ensuing post-goal crush was hurting his new ‘NUFC’ belly tattoo.

According to the Huddersfield Examiner, Smailes claimed his freshly-inked tattoo “became sore” when pressed against the barrier, so he vaulted over it and into the no-go area between the turf and the terraces.

The 24-year-old – who received a football banning order for punching a fan in 2011 – wasn’t issued with another order, but the court have ordered him to pay a £484 fine, as well as £85 court costs and a £32 victim surcharge.

The defendant was being shoved up against the barrier and then jumped over it to prevent discomfort having had a new tattoo.

He ran towards the pitch but stopped himself before entering the pitch.

This was in the last minute of the game when Newcastle scored and he was celebrating.

He didn’t encroach into the pitch as he knows he shouldn’t and was quickly apprehended.

Smailes was taken to Huddersfield Police Station after being collared where officers also found a bag of cocaine about his person.

He also pleaded guilty to possession of the class A drug, claiming that he only used the drug socially and on occasion.

All in all, a grand day out.