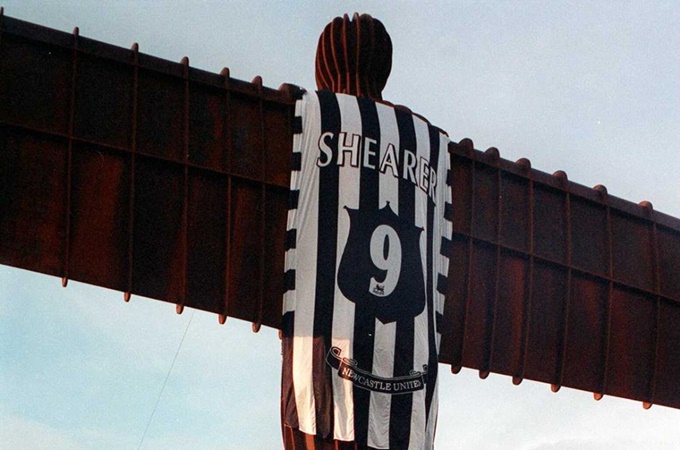 Originally denounced as an eyesore by some, The Angel of the North has now been welcoming weary pilgrims back to Gateshead and Newcastle for two decades.

Anthony Gormley’s imposing steel sculpture was completed in February of 1998 and has now been in situ on Birtley hill, arms outstretched above the A1, for 20 years. Where does the time go?

Anyway, while the rusted hulk proved to be a contentious installation at first, the Geordies slowly began to warm to their new landmark and, in the run up to the 1998 FA Cup Final in May, the local populace finally appeared to claim it as their own.

Indeed, ahead of Newcastle’s big clash with Arsenal at Wembley, a gang of Toon fans draped an enormous 30ft facsimile of Alan Shearer’s iconic No.9 shirt over the angel, thus bringing unto their bosom…

This is what Antony Gormley thought of that @alanshearer shirt stunt on his #AngelOfTheNorth pic.twitter.com/epqXwZybM3

The plan to dress the Angel in Shearer’s colours was hatched by Kevin Waugh and a small group of fellow Newcastle supporters, who used fishing line, golf balls and catapults to hoist the massive shirt into place.

Shearer later signed the XXXXXXXXXXXXXXL shirt and it was auctioned off for charity.

Doesn’t it just warm the cockles to know that somewhere out there, somebody has a 30ft Newcastle jersey stuffed into their loft.