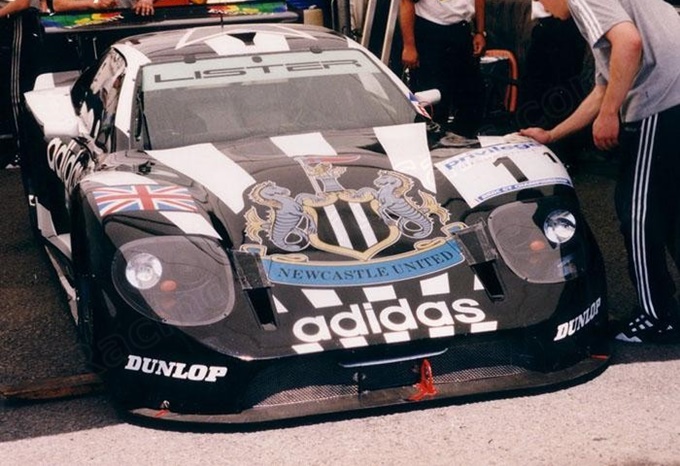 Of the myriad PR stunt tie-ins that football clubs have staged over the years, Newcastle United have an incredibly strong claim to have brokered the weirdest.

Things were pretty weird in general up at St James’ during the mid-to-late 1990s, with topsy-turvy football regularly exacerbated by topsy-turvy

As such, back in 1996 it seemed perfectly natural that Newcastle should buddy up with Adidas and Dunlop and launch their own motor racing team.

The consortium purchased a couple of brand spanking new Lister Storm GTL racing cars, dolled them up in black and white livery, whacked a huge Newcastle badge decal on the bonnet and entered themselves into several endurance races around the world.

This from Super League Formula:

Backed by Adidas and Newcastle United Football Club from 1996-98, the GTL was classified in the GT1 class – the fastest class of the mid 1990s – and widely considered, at the time, to be a new breed of supercar.

Indeed, the Toon Listers took part in 24-hour race events at Daytona and Le Mans, crashing out in both – thus proving they were of genuine Newcastle United stock.

One of the cars was even presented to fans on the pitch at St James’, with pictorial evidence – albeit a little blurry – to prove it.

Newcastle aren’t the only Premier League side to dabble in motorsport either, with Liverpool entering a car in the 2008 Superleague Formula series…

We can’t imagine the commercial rewards were overly impressive (massive losses incurred by any chance?) but you can’t blame them for having a go.