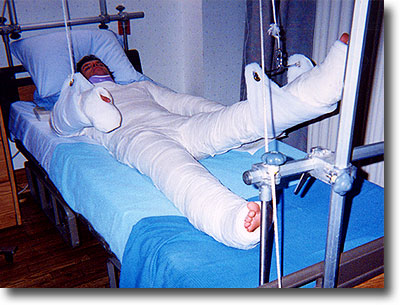 Poor Michael Owen has suffered more cruel injuries than a nymphomaniac hedgehog in recent times. So his electric form for England must have brought a smile to every face in Newcastle, who have still yet to see him at his best in a stripy shirt.
But is a fit Owen really too good to be true Geordies? Tragically there’s still three whole days to get through before your game against Derby, click “continue reading” to read what we think will probably go wrong in that time. Or just sit back and pray he’ll be able to stay fit and able to recapture some of his brilliant England form for Newcastle’s live on TV clash at Derby on Monday…
Sponsored link: Derby v Newcastle is available on Setanta on 17/09/07

Probable Owenjuries…
1) Leek impalement
After years of hiding his Welsh roots Michael will be playing with some leeks in secret (probably), slip and get one stuck in an eye socket. Yowch!
2) Metatarsal snapped in ASDA
Whilst shopping for groceries on Saturday, fans will mob Owen, and beg him to recreate his goal. With only ASDA soup cans available for balls, he’ll toss it up, boot a can of Minestrone and snap the tiny foot bone.
3) Helicopter landing on his face
Poor Michael commutes to Newcastle via chopper. Chances are the pilot will be so in awe of his comeback, he’ll see him on the runway and accidentally land his bird on his melon.
4) PlaySation injury caused by David James
With Owen’s old pal “Jamo” hooking back up with England, no doubt the consoles would have been cracked out. And just like Jamo, playing himself on FIFA will probably injure poor Michael.
5) Spontaneous combustion
He’s so hot right now, he might actually just combust. Oucher!
6) Tit to the face
Training with Viduka is tricky. Every time he jumps, blubber wobbles frantically. Those bosoms of ‘Duka can get up quite a momentum and hurt a strike partner.
7) Debilitating depression
He’s just got back with his old flame Emile and suddenly he’s lost him again. All this emotional coming and going will be too much for Michael to cope with.
8) Broken jaw
Outcast Freddy Shepherd not only doesn’t like Owen very much, he doesn’t seem to be taking being away from Newcastle very well. He might go postal and punch Michael.
9) Knee knack
Well, chances are…
10) Foot and Mouth
A trip to Derby is most dangerous in these times. Their Ram mascot might have the disease and Michael will probably contract it during the match warm up.