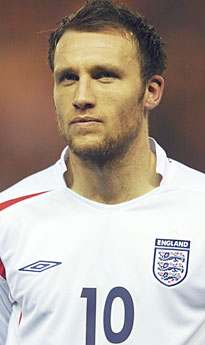 With the boy made from glass, Michael Owen, seeing a specialist about his brittle bones, the Newcastle United striker going to miss England’s crucial Euro 2008 qualifiers against Estonia and Russia next month. It’s a damn shame as he looked like he might be returning to form with some decent goals in recent weeks.
So with Little Mickey out, and Emile William Ivanhoe Heskey out with a fractured foot, Steve McClaren is having to look elsewhere. The press are all looking toward West Ham’s Dean Ashton, recently back after a year on the sidelines with a broken ankle. However, scoring two in two, is Ashton the right man for the job?

Ashton said “It’s down to Steve McClaren but obviously I’d be delighted to be selected. I feel I’m ready for an England call-up. It would be lovely to finally realise my dream of winning a first England cap. It’s massively exciting to be back, though; I really appreciate every minute I play now. I’m feeling very good at the moment. I feel I’m 100% fit.”
If England want an old fashioned striker, then Ashton could fit the role perfectly. Ashton added “Emile Heskey was outstanding for England against Israel and Russia, so hopefully that shows there is room for a big guy up front.”
However, Peter Crouch is surely above Ashton in the pecking order, as is Wayne Rooney who are more likely to figure. However, we all think we know better than McClaren, so who would you pair up top? Would you take a gamble on Ashton? Would you go for experience? Or would you pick someone entirely different?