These are players that I think Newcastle & Keegan have a realistic chance of signing and who would improve the NUFC squad â€“ rather than cloud-cuckooland signings like Kaka or Lionel Messi, which, let’s be honest, aren’t going to happen. 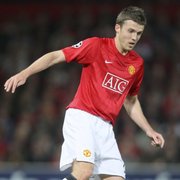 1. Michael Carrick (Man Utd)
Carrick was born in the north-east and I imagine he would be warmly welcomed by Newcastle fans. He is also talented enough to be the midfield conductor of King Kev’s new, attack-minded team. Carrick hasn’t been an unqualified success at Old Trafford, and could leave for the right price. He and Newcastle would make a good fit.
2. Jermain Defoe (Spurs)
Keegan will want pace and directness in his attacking players, and Defoe fits the bill perfectly. The England striker is unsettled at Spurs and Keegan’s brave new world may appeal to him.
3. Shaun Wright-Phillips (Chelsea)
Finding some of his best form now, but still not guaranteed a place in Chelsea’s first team. Like Defoe, SWP’s career has stalled and a fresh challenge could revitalise him. Has attributes â€“ pace, skill, positivity (i.e. plays with a smile on his face) â€“ that appeal to Keegan.

4. Zoltan Gera (WBA)
Having a fine season for West Brom, and has proved himself in the top flight before – well, he is captain of the Hungarian national team. Definitely has the talent and creativity to play for Newcastle.
5. Danny Shittu (Watford)
Watford’s giant, rock-like central defender could become a cult hero at St james’. Was recently called up to Nigeria’s squad for the Africa Cup of Nations and is an underrated defender. He’s great from set pieces too.
6. Wes Brown (Man Utd)
A rumoured target for Newcastle under Sam Allardyce and you can see why – Brown is an international defender who can play at full-back or centre-back. But he doesn’t quite cut the mustard for Man Yoo, so Newcastle will no doubt wave lots of cash in his face.
7. Michael Kightly (Wolves)
Kightly, 21, is a twisty, turny winger with pace to burn and a good work ethic. He’s one for the future, but Keegan can’t just bring in experience; youth and potential is needed too.
8. Giuseppe Rossi (Villareal)
Has already played on loan for Newcastle, and doing well now at Villareal. If it was my choice, I’d sell crock Michael Owen (whilst he still has some value) and buy in a new fox-in-the-box, like Rossi. Man Utd may have first dibs on him though, should the Italian-American return to the Prem.
9. Daniel van Buyten (Bayern Munich)
Classy central defender who is reportedly unsettled at Bayern. Van Buyten is a seasoned international (almost 40 caps for Belgium) and at 29 is still good for at least two or three seasons.
10. Klaas-Jan Huntelaar (Ajax)
Currently at a bigger club than Newcastle, but there is no doubt that he would be tempted to prove himself in the Premier League. Huntelaar is a very good striker indeed and has been linked with most of the top clubs in Europe. Would be a real coup for Keegan to secure his signing. Unlikely though, but not impossible.
11. Michael Johnson (Man City)
The 21-year-old central midfielder has shown glimpses this season of his massive potential. He may not turn out to be the next Steven Gerrard, as some predict, but he has all the tools to play for England’s senior team, and sooner rather than later. Would Man City sell him? Yes, for the right price.
Who else would you like to see on Keegan’s shopping list?