Barton is your dickface of the weekend… 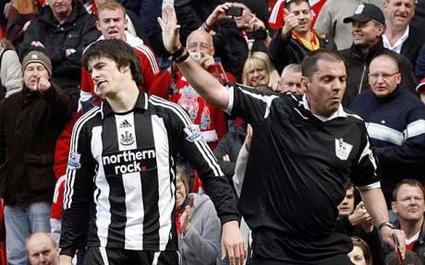 Joey Barton had a huge bust-up with Alan Shearer after Newcastle’s 3-0 defeat at Anfield on Sunday. Barton was sent off for a mindless tackle (not the first time I’ve started a sentence in that way) on Xabi Alonso, prompting Shearer to break out the hairdryer after the match. Barton wasn’t having any of it though. According to the Current Bun, this is how it playd out:
‘A Newcastle insider said: “It was unbelievable. They were like two stags…

“Shearer told Barton he had made a mistake putting him back in the team, that he thought Barton was good enough to do it but he had shown he wasn’t.
“Joey shouted at Alan that he was the best player at the club, which was why he had to play him. Alan said he wasn’t, called him s*** and Joey replied that he was a s*** manager with s*** tactics.
“At that point, it looked like they were going to have a full-scale brawl and had to be dragged apart.”‘
Oh dear. Just when you thought Barton couldn’t possibly tarnish his reputation further, he proves you wrong. The boy is like Roy Keane, only with a very small fraction of Keano’s talent. If he really thinks he’s the best player at Newcastle, he needs his head examined -Â and it’s not like Newcastle are blessed with talent.
The fact that Barton has a point about the abject Shearer’s managerial ability is moot, though I did enjoy Liverpool fans chanting “You should have stayed on the telly”. With relegation looming large, Barton should have behaved more responsibly. This is the behaviour of a reckless idiot:

Newcastle United have suspended Barton for two weeks without pay, and I doubt he’ll play for the club ever again. Depressingly, this incident won’t stop another club from giving him a “second chance” (more like eighth chance). What a dickface.