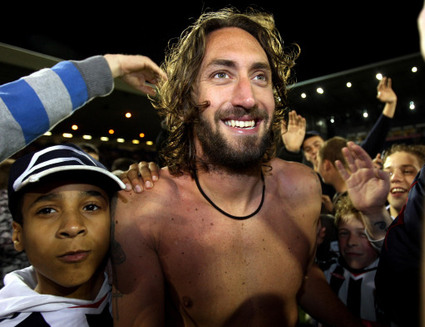 Happier days for West Brom’s skipper
1. Jonathan Greening (West Bromwich Albion)
West Brom’s bearded captain, who never quite made the grade at Man Utd, has been the driving force for his team this season. His mental strength is admirable (his head rarely drops), and he can play a bit too. If that wasn’t enough, he’s also loyal -Â I’ve no doubt a mid-level Prem team would snap him up this summer, but he’s said that he wants to stay at the Hawthorns for the rest of his career. Nice guys like Greening may finish last sometimes, but Baggies’ fans won’t forget his efforts.

2. Tuncay (Middlesbrough)
If Boro had just one or two more players with the heart and quality of Tuncay, they wouldn’t be in the mess they currently find themselves in (i.e. almost certainly relegated). When Boro go down this weekend, as they surely will, Tuncay will probably leave, and rightly so – and I’m sure every Boro fan would wish him the best. The Turk deserves to be remembered as one of Boro’s best ever foreign signings. 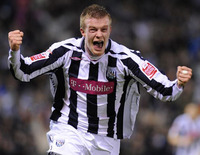 3. Chris Brunt (West Brom)
WBA’s top scorer has enjoyed a terrific 2009, partly thanks to Tony Mowbray’s decision to switch him to the right flank (Brunt, who is left-footed, is usually a left winger). Rumours suggest that Aston Villa are interested in signing the Â£5million-rated Northern Ireland international this summer. Like all of the players on this list, Brunt is too good for the Championship. 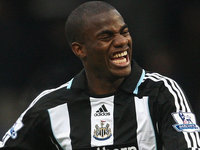 4. Sebastien Bassong (Newcastle United)
The previously unknown defender, a graduate of France’s renowned Clairefontaine academy (which produced Thierry Henry, William Gallas and Nicolas Anelka), has been one of the few positives for Newcastle this season. It’s worrying for the Toon that he’s banned from their final crunch match at Villa, after picking up a red card against Fulham. If Newcastle do go down, I wouldn’t be suprised to see Arsenal sign Bassong this summer.

5. Michael Turner (Hull City)
The 25-year-old defender dominated the Tigers’ end-of-season awards, when he was named the Club’s Player of the Year and Players’ Player of the Year. Turner also picked up the Official Supporters’ Club Player of the Year award, to complete a fully justified hat-trick of gongs. If Hull do go down -Â I think they’ll be safe, just -Â I expect a Prem team to come in for his services. 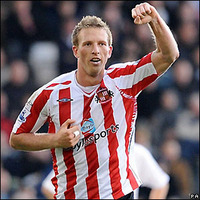 6. Danny Collins (Sunderland)
The unsung defender scooped the Sunderland Supporters’ Association Player of the Year award for the second year running, in recognition of his consistently solid performances, at left-back and centre-back. He’s the sort of passionate journeyman who never lets his team down.
Anyone I missed out? You know the dealio…