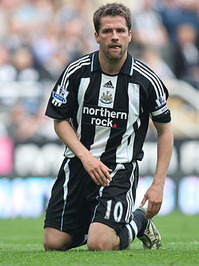 The Daily Express, that bastion of quality journalism, has awarded substantial damages to Little Mickey Owen. The Express paid (an undisclosed amount) for an article it published on its back page last month, titled “Unwanted Toon striker at a cross roads, Finished at 29?” Another piece ran with the headline “Owen ready for sad finale”.
The pieces alleged… well, you can guess from the headlines exactly what they alleged.
Owen wasn’t about to stand around (or sit on the bench, or lie on the physio table, to be more accurate) and take this, so he sued the newspaper, even though at the time the article was promptly replaced with one titled “Owen: I’m not finished”.
Ah, don’t you love the way modern tabloid journalism works.

The Express also agreed to publish a public apology to Owen.
A spokesman for Owen said: “Michael is delighted to have won his case and to have set the record straight. He would have preferred not to take action, but had no alternative in this case. Michael is pleased that this matter has now been resolved and he can put it behind him.”
Now if the Express had said “Owen is past it”, or “Owen is a shadow of his former self” – it’s hard to argue against either viewpoint – then they’d have got away with it. That’ll learn them.