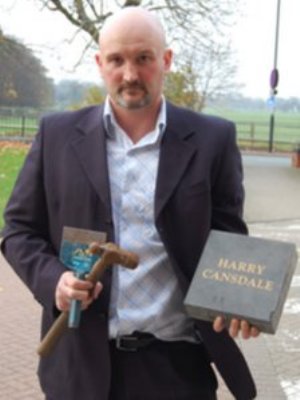 According to the Beeb, this ‘ere jilted Newcastle fan has dug up and removed a commemorative brick from outside what used to be St James’ Park in protest over Mike Ashley’s decision to award the stadium’s naming rights to himself last week and rebrand the ground as the ‘Sports Direct Arena’.

Graeme Cansdale, a card-carrying member of the ‘Mike Ashley Out’ campaign, bought the £50 slab for his father as a 72nd-birthday present 11 years ago, but has since hired a stooge to tear it out of St James’ Way and replace it with a plain brick in protest over the running of the club.

“Eleven years ago I bought what was called a ‘heritage stone’ that was sold by the club, Newcastle United, to, you know, be part of the fabric of St James’ Park.

“I’ve actually reclaimed my own property. It has a certificate of ownership. Now that St James’ Park no longer exists I think I’ve every right to protect my property.

“For those who are worried about health and safety we did replace it with the same sized brick.”

Phew. That’s certainly a weight off my mind. Wouldn’t want the integrity of the newly renamed ‘Sports Direct Cheapo Golf Umbrella and Lonsdale Jogging Bottoms Walkway’ compromised in any way.

Cansdale also said he would not be returning the brick while owner Mike Ashley remained at the club. So there.