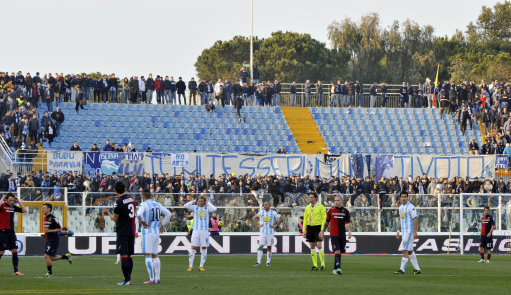 After clocking up the second lowest average attendance in Italy’s top flight last season, Pescara have come up with a canny way on coaxing their fans back to the Stadio Adriatico following their relegation to Serie B by giving free 2013/14 season tickets to unemployed fans.

“We’re delighted to have made it possible, thanks also to the precious help of the Province, to distribute almost one thousand season tickets to people in difficulty.

“We always want to get closer to our fans and to their demands and give a hand to those who are less fortunate but who, with lots of passion, want to follow our colours.”

The club have worked in conjuction with the city’s council and employment office to produce the scheme (the first of its kind in Italian football), with the president of the province of the Province of Pescara, Guerino Testa, saying that he was “proud” of the inititative as “it gives those people who are out of work 90 minutes of enjoyment at the stadium.”