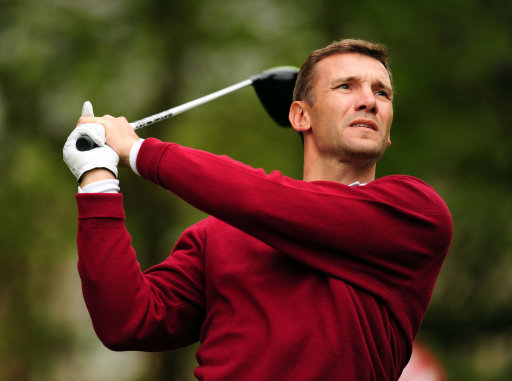 Last we heard he was on the verge of moving into the murky world of Ukrainian politics, but it seems that Andriy Shevchenko has opted for an equally unusual post-football career with the news that he is about to make his professional golf debut at the Kharkov Superior Cup in his homeland.

The Superior Cup is part of the Challenge Tour which, we’re reliably informed by golf folks far more knowledgeable than we be, is basically the second tier of professional European golf.

“I have played with many good players in pro-ams but this is different. I hope I play well…but I just want to have a good time and enjoy the week.

“It’s nice the Challenge Tour have decided to come here but the course is quite difficult.”

Shevchenko has already played in a good number of semi-serious pro-am events, but his maiden appearance in Kharkov will mark his first ever pro golf outing.

We think we’re right in saying that Sheva’s fellow AC Milan alumni Marco van Basten also attempted a similar move into the world of nine irons and sand bunkers after injury curtailed his football career, but he failed to make the grade – though, of course, we could be hopelessly wrong about that…as per usual!