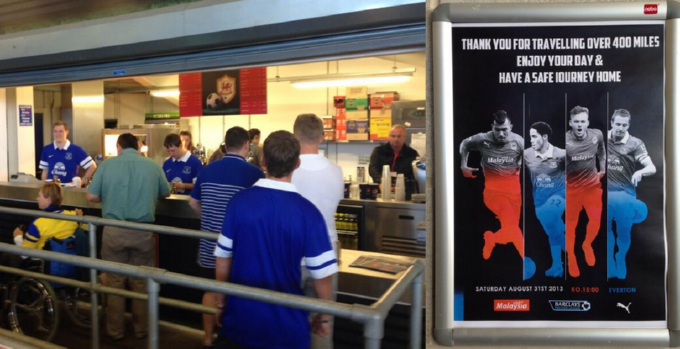 Hats off to Cardiff City, who are going out of their way this season in a bid to make away fans visiting the Cardiff City Stadium feel as “at home” as possible with what the Welsh club are calling their “Away Fan Pack”.

According to the Premier League’s official website, in a bid to welcome traveling supporters and thus entice more of them come matchday, Cardiff’s hospitality pack includes away fans being greeted by a “matchday assistant” on arrival, who gives them all the information they need to get to their seats/toilets/beers, etc.

Once inside the stadium, the away fans are served food and drink by staff wearing their own team’s shirts, which are later given away to a lucky few. Cardiff also tailor their matchday refreshments depending on which team they happen to be playing so, for instance, if Middlesbrough were in town, the snack stands will serve regional delicacies like the famous “Parmo” – as they were when Boro came to Wales in the Championship last season.

The club have also set up a dedicated Twitter account (@CardiffCityAway) so visiting fans can keep up to date with the latest bits and bobs and/or have any of their queries answered.

Cardiff have also launched an online “away fans guide” for 2013/14 which covers everything from travel details and ticket information through to hotels, activities and local attractions.

Bloody Nora, we’re seriously impressed. You’d have got none of this at Ninian Park! It’s no wonder they’ve been voted Football League Family Club of the Year twice in the last three years.