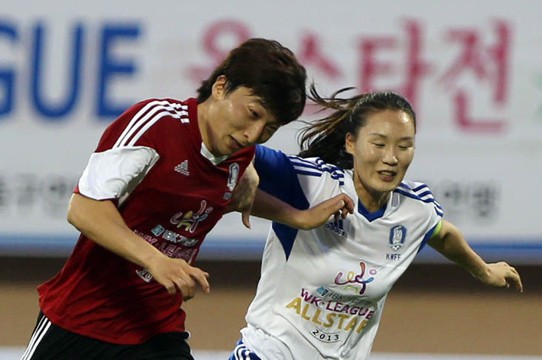 Gender is on the…erm, agenda over in the South Korean Women’s League at the moment, where rival coaches have threatened to boycott the entire competition until last season’s top scorer, Seoul City striker Park Eun-Seon, is subjected to a gender test.

Park dominated defenders and rattled home an impressive 19 goals in 22 games for Seoul City during the 2013 season and as such, suspicious coaches from six rival teams (there are only seven teams in the league) are now putting pressure on the Seoul Sports Council to have her checked for man bits – though the council are hesitant to subject Park to what they themselves are calling a “serious violation of human rights”.

“We have no intention of accepting the gender verification test just to stop the boycott, but if it is needed for Park to compete in an international game and under specific regulations of FIFA, we will consider it.

“This is a serious violation of human rights that she’s suffering for a second time. The question regarding Park’s gender identity shall never be raised again. The city of Seoul will take all necessary measures to protect our player’s human rights.”

Indeed, it would be the second gender test that Park would have undergone as the Korean FA have also confirmed that Park, now aged 26, has already passed a gender test which she was made to take at the age of 15.

Writing on her Facebook page, Park said she felt “humiliated” by the boycott threats, but that questions over her gender were nothing new for her and that she knows how to deal with them.

“I have gone through the gender examination thing several times. I did it in a World Cup, in an Olympics and in several others and there were no problems,” she wrote.

“I’ve worked so hard to get to this point, and I will not give up easily. I know what these people are trying to do, and I won’t fall down.”

Incidentally, the coach who first submitted the gender test request to the Korean FA, Suwon FC’s Lee Sung-Kyun, has since resigned, apologising for “causing Park any pain” before claiming that his motives were misunderstood and that it was only a joke.