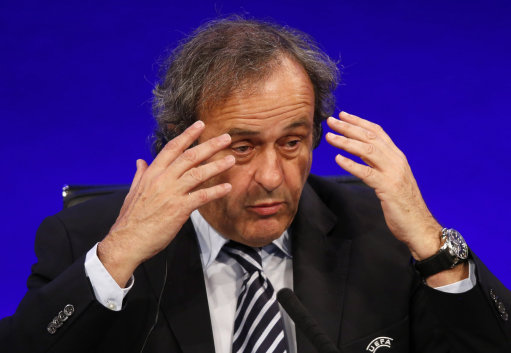 Speaking in an interview with Spanish sports newspaper AS, Michel Platini allowed his latest brainfart to leak out into the room, outlining his feverish plan to eradicate yellow cards from the game and replace them with rugby-style sin bins for caution-worthy offences.

“I would make it like rugby, punishing the offender with 10 or 15 minutes out of the game,” Platini said. “It is an idea. Now it needs to mature and see if it really is good for the game. It is a proposal to be explored.”

The fundamental kernel at the centre of Platini’s idea is actually fairly sound, with UEFA’s grand poobah pointing out that, as things stand, when players are suspended for accumulating a certain number of yellow cards they are suspended for future games, meaning that the club they actually picked up the booking while playing against don’t receive enough of an advantage.

Platini reckons sin bins would be fairer as, in his words, “that way, the benefit goes to the team he is playing against, in the same match, instead of a sanction by cards which is carried out against a third team, the next on the calendar.”

The system works in rugby, a) because the teams are larger, b) you have to do something fairly uncouth to earn a sin-binning and, c) because the game is played in an incredibly commendable, sporting spirit.

Given some of the soft-as-shite ‘tackles’ that are deemed yellow-worthy in top flight football at the moment, the introduction of 15-minute sin bins would be a logistical nightmare during most games. Safe to say, we’re not on board. Here’s hoping this particular Platini-ism is nipped in the bud, pronto.

Any thoughts on the matter, Pies fans?