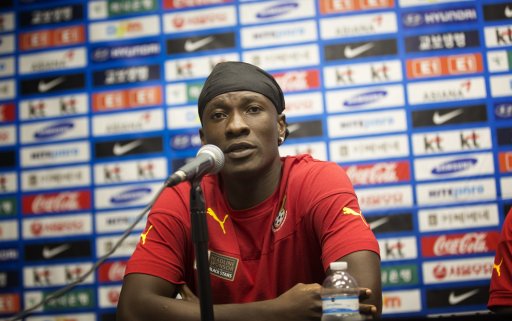 “I know what you’re all thinking, but no…”

Here’s the kind of news story that doesn’t come along every day in football.

Asamoah Gyan has been forced into holding a press conference today wherein the former Sunderland striker will officially deny swirling rumours in his homeland that he has murdered Ghanian rapper Castro the Destroyer as part of a human sacrifice ritual.

According to reports, Castro and his young friend Janet Bandu have been missing since disappearing – presumed drowned – while on holiday with Gyan’s family following the conclusion of the 2014 World Cup.

Two months down the line and neither Castro or Bandu’s bodies have been found, prompting speculation over the pair’s sudden disappearance to run riot in Ghana – with many suspecting foul play on Gyan’s behalf.

So much so, in fact, that Gyan (who currently plays his football in the UAE with Al-Ain) has been forced to issue the following statement via his personal website:

“The Gyan Family will hold a press conference on Wednesday address recent issues of public interest including the disappearance of musical icon Theophilus Tagoe (aka Castro).

“The press conference which will take place at the Alisa Hotel will be addressed by counsel for the family Kissi Agyabeng.

“It will be recalled that Theophilus Tagoe (aka Castro) and Janet Bandu went missing while on a holiday hangout with Family and Friends of the Gyan’s at a resort in Ada back in July.

“Relentless efforts are still being made to find the missing duo.

“The press conference will therefore seek to update the public through the media on the status of investigations so far.

“The opportunity will also be used to officially respond to some allegations and untruths bundled about in the media over the role of Asamoah Gyan in the duo’s disappearance.

“The press meeting will also touch on the recent court case instigated by the Ashanti Regional editor of Graphic Communications Group Daniel Kenu against Baffour Gyan and Samuel Anim Addo.

“There will also be an opportunity for the press to ask related questions in a Q&A session during the press meeting.

“All media houses are therefore invited to attend this press conference which will begin at 1pm (local time) at the Alisa Hotel in Accra on Wednesday, September 24, 2014.”