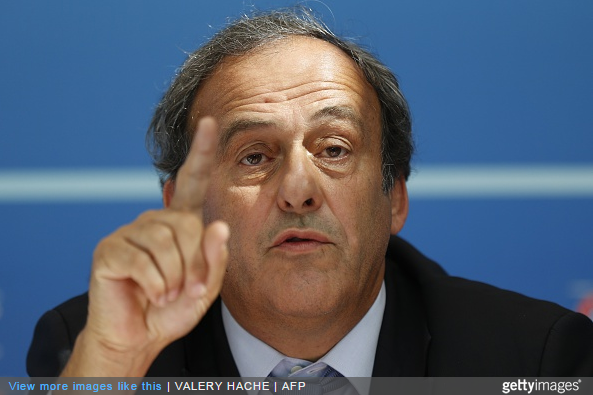 This is a biggy.

In the past few minutes, FIFA have announced that both Sepp Blatter and his UEFA counterpart, Michel Platini, have been provisionally suspended for 90 days at the behest of FIFA’s ethics committee as various investigations into corruption allegations against the pair continue to rumble on…

The statement that brought down the house of FIFA: pic.twitter.com/kZobpWu0JH

As well as Blatter and Platini, FIFA secretary general Jerome Valcke has also been banned for 90 days, and FIFA presidential candidate Chung Mong-joon has been banned for six years and fined 100,000 Swiss francs. The house of cards is a-toppling.

News of Blatter’s imminent suspension broke yesterday evening, though it took until this morning for rumours to emerge  that the ethics committee were also considering metering out the same disciplinary measures to Platini.

Though he denies any wrongdoing, Platini is accused of receiving “disloyal payments” of £1.6million from FIFA.

However, shortly before the suspensions were made official, Platini released a statement to say that he is blaming an insider FIFA source for leaking word of his ban, claiming it was an “insidious” plot to damage his reputation ahead of his run for FIFA presidency:

This deliberate leak is insidious in nature and has come about in an unacceptable manner.

It is essentially an attempt to damage my reputation.

Bit late for that, mon amis.