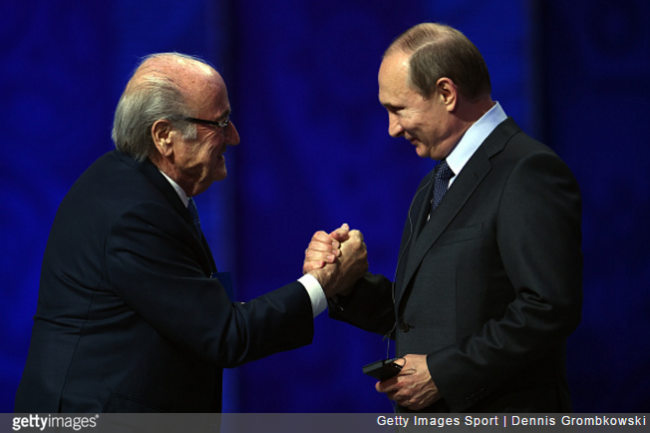 As Sepp Blatter continues to stand trial in the very ethics court he created, one of his long-time allies has once again reared his head to blow smoke up the deposed FIFA president’s bung-hole.

Speaking in defence of his friend during a press conference in Moscow today, Vladimir Putin stated for the record that he believes Blatter should receive a Nobel Peace Prize, presumably for his tireless work in the ‘flagrant self-interest’ sector.

Repeating a line he first trotted out in July, Putin was keen to stress that the world should be grateful for all Saint Sepp has done for us.

Blatter is a very respected person. He has done a lot to develop world football.

We should give him the Nobel peace prize.

First being named “Swiss Person of the Year” by a prominent newspaper and now receiving a Nobel Prize endorsement from perhaps the only person left in Europe who considers Blatter to be perfectly morally upstanding and just.

This has been quite a day for Ol’ Sepp.