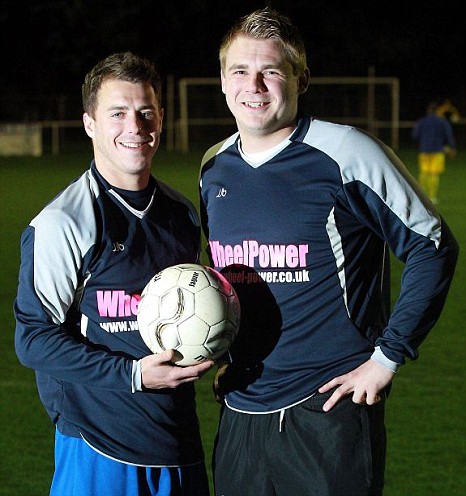 The odds are you may not be familiar with the Torbay Sunday League in Devon, but a team going by the name of ‘Wheel Power’ are currently topping the table and their ‘goal difference’ tally received one hell of a shot in the arm last weekend when they inflicted what has tentatively been labelled ‘the biggest defeat in the history of British football’ on their opponents, second-bottom side Nova 2010.

Nova conceded 20 goals in the first half and attempted to ‘shut up shop’ at the break (you could feasibly argue it was a little bit late for that!) yet still went on to let in another 38 goals before the final whistle, with brothers Robbie and Stuart Bowker (pictured) scoring 28 times between them – Robbie nabbing 18, Stuart a mere ten.

“At 50-0, they’d had enough but the referee told them they must carry on playing or they would risk being fined.”

“A lot of the proper players didn’t turn up so we expected to lose, but not by that much.”

As mentioned, Wheel Power’s victory is now thought to be the biggest victory in British history, with Cornish side Illogan’s 55-0 mauling of Madron FC back in 2010 having been acknowledged as the previous record.

As for Wheel Power’s championship credentials; they’ve now scored a whopping 167 goals in the space of 15 games this season – which tells you all you need to know about the Torbay Sunday League title race.