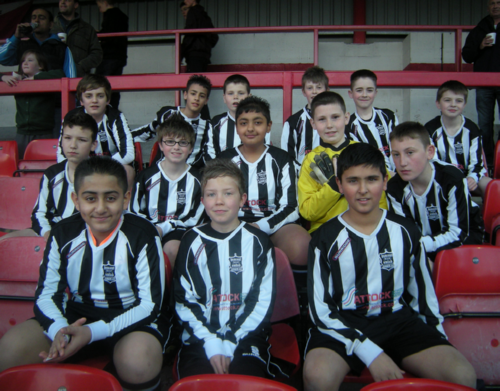 Massive congratulations go out to the lads in Huncoat United’s U15 string who shattered their 94-game winless streak at the weekend to taste victory for the first time in five – FIVE! – years

That’s right. The team hadn’t so much as drawn a single game since they formed five years ago, finishing rock bottom of the table on zilch points every single season and conceding 933 goals in the process – their worst defeat being a 25-0 loss.

The streak was broken on Saturday afternoon when Huncoat managed a 2-0 win over Brierfield Celtic in the Accrington and District Boys League. The result didn’t lift them off the foot of the table, but they are now sitting pretty on their highest ever points tally: three.

The Huncoat goalkeeper even saved a penalty to keep his first ever clean sheet!

Manager Paul Chadwick was made up for his beleaguered squad:

“We might be the worst team in Britain but we’re also the happiest. All the boys were jumping up and down at the final whistle. I joined in and so did the parents.

“That said, I don’t think they’re world beaters just yet!”

Like Huncoat themselves these days, Chadwick does have a point. His side are still very much bottom of the league, having somehow managed to concede 104 goals in the space of 12 games this season!