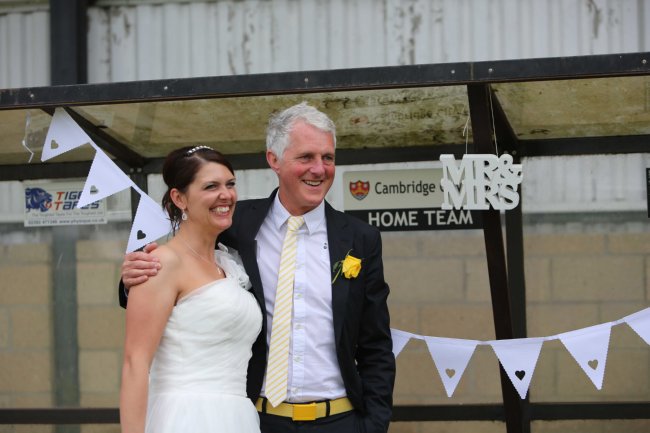 Cambridge City FC are currently in the process of flogging off whichever bits of their old Milton Road stadium people are willing to pay good money for as they prepare to ground-share with Histon FC next season.

As such, a group of former City physio and club secretary John Aves’ mates decided that, rather than the usual Soda Stream or cutlery set, they’d get their buddy a piece of proper memorabilia as a wedding present: the entire length of Milton Road’s perspex dugout!

John, 59, and his bride Caroline were married at a nearby registry office, but the wedding reception was then held on the pitch at Milton Road, which is where his mates unveiled their amazing gift.

“A couple of mates of mine, Steve and Paul, knew I’d spent a good many years in the dugout when I was physio for the team, and they thought it would be fun to buy it for me,” John told Cambridge News.

“I’ve been a Cambridge City fan since 1962 when my dad took me to my first match, and in the mid-70s I was club secretary, before later becoming the physio. I had no idea that they’d bought the dugout – it was a really cool surprise.”

So where are the lucky couple going to put the damn thing after somehow getting it home?

“We reckon it will go at the bottom of our garden, as an unusual place for a sit-down. It’s a bit long, though, so we’ll have to get it sawn in half.”