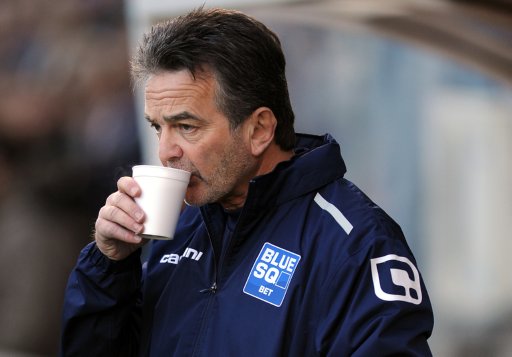 Despite having turned 60 a few months ago, Dorchester Town manager Phil Simkin may find himself turning out for the Magpies for their game against Dover Athletic after the club’s perilous financial position meant that every single member of the squad has been put up for sale.

Last season Dorchester went on a money-spinning tilt into the second round of the FA Cup, but the Conference South club are now close to brassic, with debts of just over £150,000 threatening to send them to the wall. As a result, all of their players are now on the transfer list, leaving Simkin unsure of how many men he’ll have at his disposal come 3 0’clock on Saturday afternoon.

“I will be registering as a player so that we have a full bench. Quite frankly I don’t know what players will still be here on Thursday for selection against Dover.

“One way or another we need to put a team out. It’s been very difficult.

“All the professionals are on the transfer list and it’s a very sad time for everyone involved at the football club and we need to work through it.

“It was very sad telling the players, I’ve watched a team I worked very hard to put together disintegrate in front of my very eyes and for me it’s personally very sad.

“It’s hard to see a way forward. I’ve called in a lot of favours, people have been kind but it’s a problem.”

Must be a real kick in the swingers for Simkin, a man who’s spent over 30 years at the club as their youth team coach, their assistant manager and now their head honcho – especially compared to the lucrative highs of their cup run just a season ago.

Once again we see a small club disappearing down the plughole over the amount of money several Premier League players earn in a week or so.