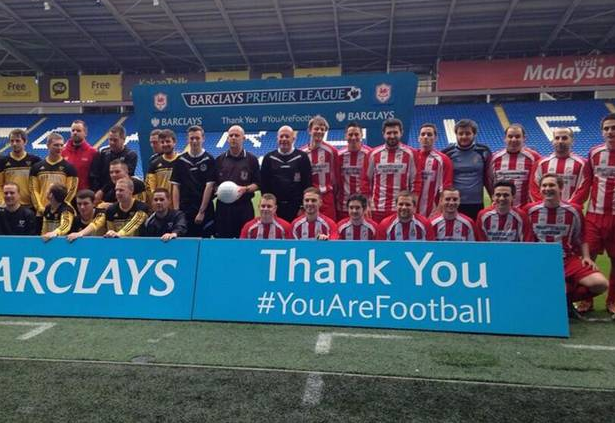 Welsh Sunday League side Malsters Arms FC have been forced to call it a day after contravening league rules by playing in a recent one-off fixture on a Wednesday evening.

We’re as shocked and appalled as you are!

According to the Independent, Malsters Arms snagged themselves the chance to play in a friendly game at the home of Cardiff City after winning a Barclays “grass roots football” competition.

Unfortunately for them, the once-in-a-lifetime game was held at the Cardiff City Stadium on a Wednesday night back in May, which apparently contravened the rules of the footballing body with which the team is affiliated: the South Wales Football Association (SWFA).

The SWFA have since written to Malsters to inform them of the disciplinary sanctions they’ll be facing, with the club subsequently having to fold and drop out of the Lazrou Cardiff Sunday Football League after finding themselves unable to afford the fines that they’ve been slapped with.

“It has been brought to the attention of the association that your club played a friendly fixture versus Max United on Wednesday, May 7.

“Your club is affiliated as a designated Sunday club only.”

The letter went on to explain that Malsters had been found guilty of misconduct as “clubs who are affiliated to a designated Sunday League can only play on that day.”

The problem is that Malsters (and all other affiliated Sunday League teams) aren’t insured by the SWFA to play on any other day than Sunday and therefore need to seek special permission from the association before doing so.

“The SWFA can’t see that we are just football fans who had an amazing opportunity to live out a lifetime dream.

“Instead it became an extremely sad last game by Malsters FC. It should have been a blaze of glory but the folding has taken the shine off.”

“The club was formed when we were 16 and many of the boys were going onto further education or leaving school to pursue a career.

“Now the club has folded many of the boys don’t see each other on a weekly basis at training or at the game.

“To be able to play on the same pitch as Cardiff City and the national team, and having bragging rights of scoring in the same goal as Cristiano Ronaldo, is an experience that no one can take away from me.”

Deabreu’s “Cristiano Ronaldo” goal being one of two that Malsters managed to muster in a fairly hefty 7-2 defeat!

Still, they’ll always have the memories.