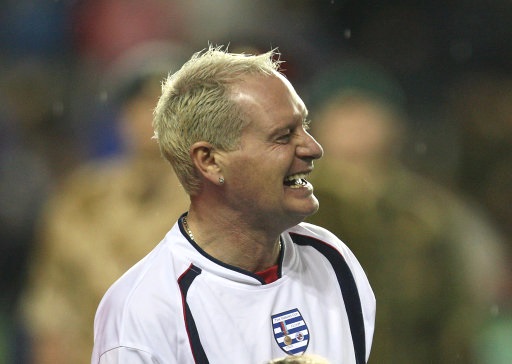 The latest chapter in the continuing story of Paul John Gascoigne has seen the former England midfielder sign on the dotted line and register with Abbey FC – a Sunday League team from the fourth division of the  Bournemouth Hayward Sunday League.

Gascoigne, now 47 (but don’t tell his face), agreed to sign for Abbey in typical Gazza style – while chatting with a taxi driver while nipping down the shop to buy fags.

“I gave [Gascoigne] the cigarettes and pulled out the signing-on form at the same time. He signed it there and then.

“I was chuffed to bits and ran to the car as fast as I could. I was skipping like a 14-year-old.”

“I’ve offered to pick him up [before games] myself!”

Bournemouth FA have since confirmed that Gazza has registered as an Abbey player and has clearance to play immediately if called upon.

For those worrying that Gazza (who last played professionally at Boston United in League Two in 2004) may have lost his once-sublime touch over the years of hard boozing and other miscellaneous self-inflicted abuse, fear no longer…