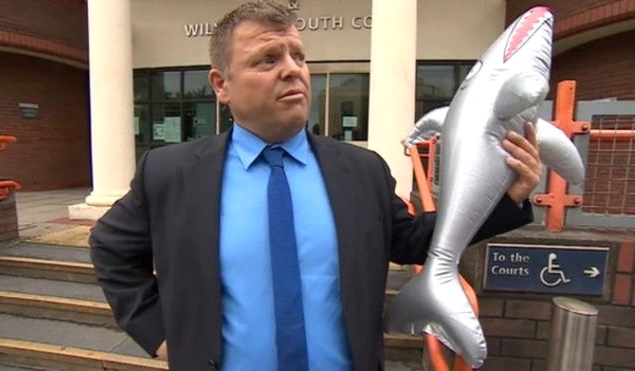 Just like that, Greater London gets its first ever reported shark attack

A Grimsby Town fan has been found guilty of assaulting a football steward with an inflatable shark.

The incident occurred during Grimsby’s 3-1 win over Barnet in the Conference at the tail end of February.

Kenneth Meech, 51, was among the 1,000 or so Grimsby fans that travelled to The Hive on that fateful day, wielding an inflatable shark that the court heard was being “waved like an axe”.

Willesden Magistrates’ Court also heard that Barnet steward Cgagi Gladyng, 59. was whacked three times over the head with the shark while Meech was celebrating the victory, blows that felt “like being hit by a roll of paper”.

Meech was given a 12-month conditional discharge for his crimes and ordered to pay £700 in costs and £100 in additional compensation to his victim.

Speaking to local news after the trial, Meech revealed that he felt “a bit deflated” by the whole charade, describing the prosecution as a “waste of taxpayer’s money”.