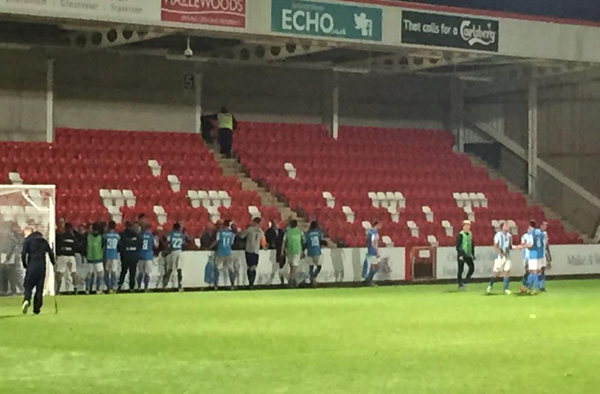 While Chelsea are busying charging fans £95 to watch their upcoming game against West Ham (though, to be fair, it’s only £75 for a restricted view seat), cracking little non-league clubs like Braintree Town are busy keeping the spirit of football alive down at the other end of the spectrum.

Appreciating that their small band of travelling fans had made a 290-mile round slog to watch their midweek game against Cheltenham on Tuesday evening, the Braintree players and staff stayed out on the pitch after the final-whistle to personally shake hands with each of the 30 away supporters who made the trip.

Despite taking the lead in the 90th minute, Braintree still managed to draw the game 1-1 – not that it dampened the spirits of Braintree fan Gordon Humphris, who was in attendance at Whaddon Road to report on the match for local media.

“It’s quite a regular occurrence for them to go over and clap fans,” Humphris told the BBC.

“But given the nature of the game and distance they walked along the line and shook everyone’s hand.”

Proud of every player @braintreetownfc tonight… a performance that only teams with a special spirit can produce!

As Humphris, who admitted that he didn’t get home after the game until 2:30 in the morning, neatly concluded: “It’s just a great effort to get there and it’s a great gesture by the players.”