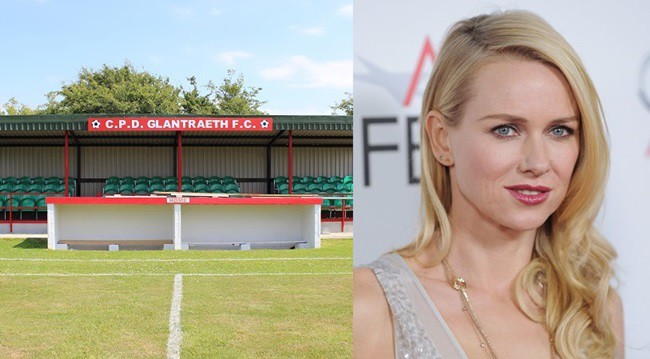 Non-league Welsh side Glanraeth FC have only got themselves a brand new honorary club president in the slightly unlikely guise of Hollywood actress Naomi Watts.

Glanraeth, who play their football in the third tier of the Welsh Alliance football league division one and regularly attract crowds of over 40 people to their home games, are based in the town of Malltraeth on Anglesey.

Watts spent time on her grandparents’ farm nearby as a child before going on to star in King Kong, Mulholland Drive, Babe: Pig In The City and such like.

According to BBC North West Wales, the decision was made to ask the English-born Australian actress to take over as honorary president when former incumbent Sir George Meyrick stepped down last August.

Glanraeth club secretary Stan Strickland then sent a letter to her agent on Sunset Boulevard in Los Angeles only to receive a positive response on Monday.

Strickland caught the Beeb up on proceedings:

She spent three years of her childhood here and attended school in Llangefni before becoming a major film star.

She has now got her publicist involved, so we could end up in the New York Times.

While discussions are ongoing as to Watts’ exact role, Strickland is hopeful that Glanraeth will be able to use her name and image on their club website, as well as letterheads and matchday programmes. In return, Watts will be provided with annual performance updates.

Exciting times for all involved!