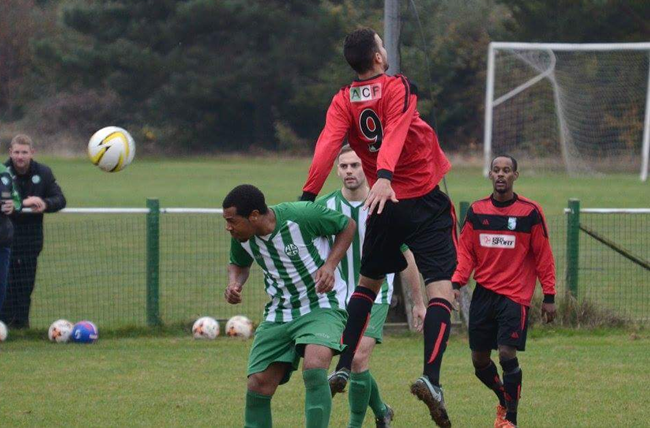 Edgware Town suffered the misfortune of having an important game against Holmer Green, the team directly beneath them in the Spartan South Midlands League Premier Division, called off in the (very) early knockings.

Indeed, as per the live updates from Edgware’s own Twitter account, Saturday’s match began badly, when they conceded the opening goal with just six minutes on the clock…

Then, just seven minutes down the line – in the very next update – the game was abruptly abandoned after the referee “lost the plot” with a fan and scrubbed the whole thing…

Referee has lost the plot and abandoned the game because of constant moaning from a fan.

Edgware then went on to flesh out the incident in a (now deleted) statement issued via their official Facebook page, in which the club confirmed that the referee decided to abandon the fixture entirely due to the contiuned and particularly vociferous “moaning” of one fan on the touchlines… 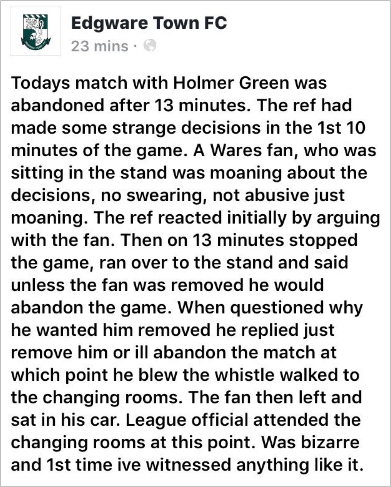 According to the match report on the Holmer Green website, the away side offered to have a qualified official among their number run the line so the assistant referee could take over, but were told that as the game had already been abandoned, it couldn’t be restarted there and then.

As such, the two clubs are currently waiting for their respective county FAs to sort out a suitable replay date.

Non-league football: The gift that just keeps on giving.