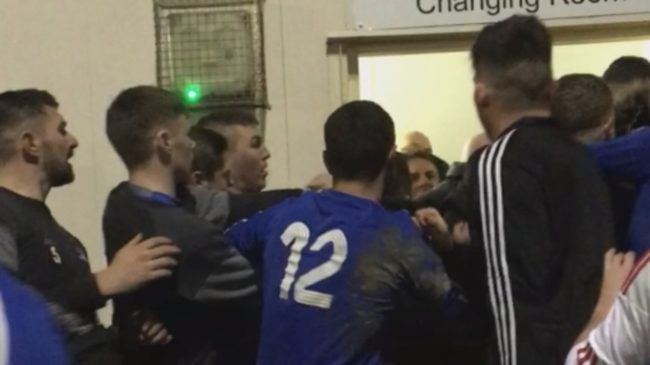 Newton Aycliffe have sacked their manager after players from the non-league club were filmed fighting their way into their opponents’ dressing room after a recent FA Vase match.

The video shows a horde of Newton players brawling after the final whistle of a 3-2 cup defeat against rivals Morpeth.

Manager Peter Dixon has since been relieved of his duties due to “ongoing ill-discipline” within the ranks at the Northern Football League Division One (i.e, tier nine) club.

It’s not been easy but we’ve acted straight away and want to draw a line under it.

If there are any investigations we will fully take part, but it is difficult to comment further.

Durham FA have confirmed that they are investigating the incident having previously sanctioned Newton for being overly aggressive in a pre-season “friendly” against Spennymoor Town.

Morpeth have also issued a statement on the matter, as picked up by the Mirror:

Morpeth Town… are shocked and disappointed after a fantastic spectacle of a local FA Vase tie descended into violent scenes after the full-time whistle.

[We] will co-operate fully with any investigation and fully trust that the game’s governing bodies will deliver a just outcome and that those involved have no further part in football.

[We] are a family-orientated club and our supporters and young families were shocked and horrified by the scenes on show, which have no place in football.

Quite so. Bloody savages.