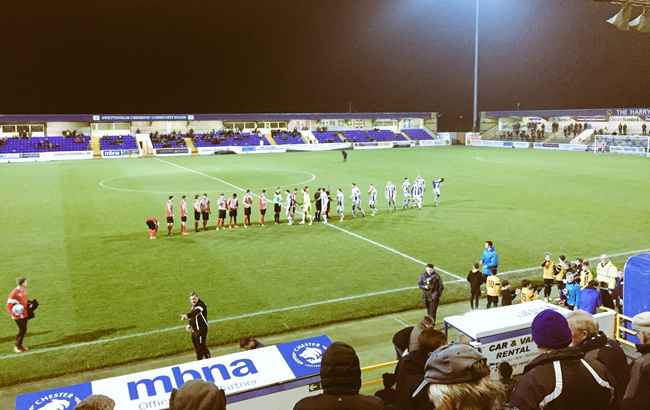 It all started well enough for the National League side…

MATCHDAY | @wittonalbionfc get us underway…(0-0)

Unfortunately for the hosts, the peaceful parity lasted just five seconds, for that’s how long it took Witton striker Tolani Omotola to reach their 18-yard box…

1′ | Oh my. Straight from kick off Omotola is through and Hudson fouls him. Pen. Hudson is booked. (0-0)

It’s as yet confirmed, but the Chester Chronicle think that their local team may have set a new world record for penalty concession.

Indeed, after a little digging, the newspaper reckon that Blaine Hudson’s trip on Omotala eclipses the previous record which was sat in the (very) early knockings of last month’s Bucharest derby when Steaua took just nine seconds to win a spot-kick against Dinamo.

As it happens, Witton actually missed the kick, only for Bradley Bauress to ram home the rebound with a full two minutes on the clock…

2′ | Disaster for the Blues. Bauress’ pen is superbly saved by @alexanderlynch1 – but the same man turns home the rebound. (0-1)

Thankfully, Chester were able to recover from their nigh-on immediate setback to win the game 2-1 thanks to a dramatic goal scored at the very opposite end of the match…

FULL TIME | @ChesterFC 2-1 @wittonalbionfc – The #Blues turn this around in dramatic style! @JamesAlabi and @EDuzza8 win it late on. #COYB