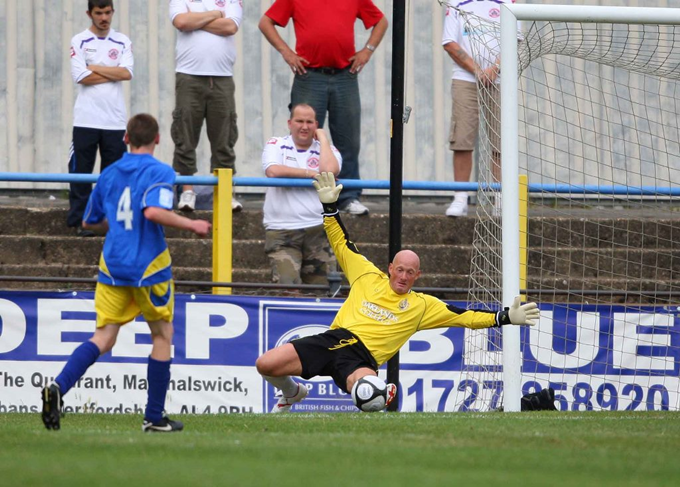 Congratulations are most definitely due to Wisbech Town goalkeeper Paul Bastock, who is now the proud owner of an absolutely formidable new world record.

On Wednesday night, Bastock equalled Peter Shilton’s astounding tally of 1,249 competitive career appearances when he started for Wisbech in their 2-1 win over Sleaford Town in the United Counties League Premier Division.

The 47-year-old, nicknamed The Old Cat by his teammates, then moved past Shilton by making his 1,250th appearance when he started for Wisbech in their 4-1 FA Vase victory over Thetford Town on Saturday afternoon.

Bastock, who made over 500 appearances for Boston United earlier in his career, has already announced that he plans to retire at the end of the current season “no matter what”.

Your record is for 1,249 club appearances in senior football, the most by any player where records exist. So it doesn’t include your England caps, but all other games for the 11 clubs you played for, in Football League, FA Cup, League Cup, Euro competitions & Charity Shield.

Speaking to the Boston Standard, the veteran ‘keeper revealed that he very nearly caved in and hung up his gloves earlier this season, before he was eventually talked around by his wife, Ann.

The gloves nearly came off for good a couple of weeks ago. But Wisbech are fourth and we’re still in the Vase. So as long as I’ve got something to motivate me I’ll keep going.

I’d love to go on a run and get to Wembley. I’ve never played at Wembley and it’s always been the dream, the reason I first put the gloves on as a kid.

Finishing all this – my career and the record and everything – with an appearance at Wembley would be the icing on the cake.

Bastock also revealed that the Sleaford player who denied him a clean sheet on the day he drew level with Shilton’s record actually apologised for doing so.

They had a penalty and he tucked it away and said ‘sorry for spoiling your day’.

That was a first.

So how did the new world record holder celebrate after his big day? By thanking everybody involved and then getting himself off to bed for an early night…

Well what a week ,talk about a rollercoaster ride ,massive thanks to my family and all at Wisbech town fc #the gaffer . I’m now the world record holder and absolutely buzzing on this . Big thank you to all the media who helped make it so special xx

The new world record holder of 1250 fa games is off to bed , night night and thank you all for your support and message’s 🙌❤️❤️#theveryoldoldcay