Rotten luck, but it looks like Chesterfield defender Laurence Maguire might not be well enough to watch older brother Harry play for England in their World Cup quarter-final against Sweden this weekend.

This is because, as confirmed by Spireites boss Martin Allen, the 21-year-old has come down with an untimely case of “Russia flu”.

Thankfully, the flu is treatable, but Maguire the younger will have to fly out to Russia to undergo tests on his condition, thus possibly jeopardising his chances of watching his sibling in action in Samara on Saturday afternoon.

The news was reluctantly broken by Allen in one of his excellent hand-penned statements on the club’s official website:

Laurence Maguire has unfortunately picked up Russian ‘flu, which is obviously quite disappointing.

I’ve had a word with him this morning and told him that this afternoon he’s got to fly out to Russia to have some medical tests. He’s got to be back here for training on Monday.

The bad news is the fact that he’s got Russian ‘flu. The good news is that he’s going to fly to Russia to see his brother play for England in the quarter-finals of the World Cup.

He’s absolutely thrilled and he’s sorted it out with his family that he’s going. It’s great for our club that one of our players is going to be watching England play.

In all serious, what a cracking little gesture from Allen and his staff.

As mentioned, the man they call ‘Mad Dog’ (just not to his face) is making a habit of writing all of his own club correspondence via the website, and some of it has been glorious so far.

Take this player unveiling for example…. 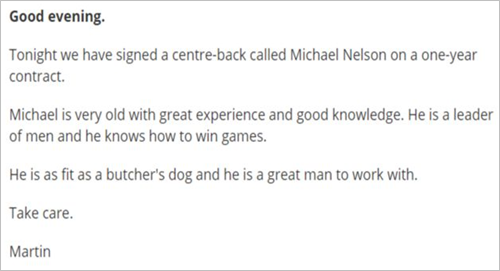 Terrific. Long may this type of thing continue.