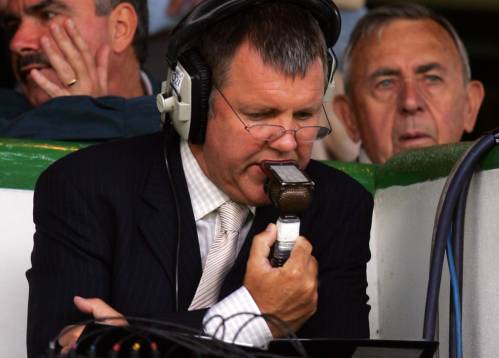 “One or two of their players aren’t getting any younger”

It’s no secret. I loathe most football commentators. Not all, but definitely most.

I do not care to recall the amount of times I have been reduced to watching long stretches of televised games in complete silence over the past few years, as a preventative measure taken to quell the acid-reflux caused by those jibber-jabbering morons up in the gantry.

Whether I am faced with the endless fevered psuedo-prose of Peter Drury, the spittle-flecked stats and senility of John Motson or the crazed balls-out monkey-masturbation hero worship of Clive Tyldesley, it always results in the same two things – further erosion of that poor over-used and abused mute button on my remote control and the welling up of angry, confused tears.

However, I think I’ve come up with a solution:

With all the interactive options the serious armchair fan has at his or her disposal these days (multiple match choices, player cams etc.) it’s high time broadcasting companies introduced a ‘red-button’ option to mute the commentary but not the crowd noise, allowing viewers to soak in the atmosphere of the stadium without being bombarded by relentless stats (if you’re lucky) and sixth-form level word-wanking (if you’re not).

I’ve been seriously thinking about writing to the BBC (initially just to express my desire to shoot Mark Bright through the gullet with a cross bow) to put forward the idea mentioned previous, but I never got round to it for some reason or another – maybe I just wasn’t angry enough at the time but, reading this article back to myself, I think I might be now.

I can’t help but feel that, over the last few years (and by ‘few years’, I mean the last decade or so) commentators have been overstepping their mark by about 950,000 words a game.

There seems to be a precedent in place that says a wad of notes (of about ‘Magna Carta’ thickness) needs to be researched and produced pre-game, full of the kind of endless stream of statistics, numbers, permutations and percentages that would bore poor old John Wisden to death, if he was alive – which he isn’t.

“Call it, you spineless git!”

‘Twas only the other night, during the Champions League final in fact, that Bayern Munich winger Arjen Robben produced one of the most blatant dive-followed-by-injury-feigning pieces of gamesmanship I had witnessed for quite some time (a few days at least).

It was clear to see during the super-slow motion replay that the Dutchman had fallen to the floor in compensation for his poor control, in a desperate attempt to get something in return for his awful touch and, for the record, the cheating swine was rewarded with a free-kick.

Robben knew it was a dive, the Inter defender in question (I believe it was Christian Chivu) knew it, I knew it, you knew it, the 100 million+ people watching at home knew it and I suspect the commentator (our old friend Tyldo) knew it – but would he call it? Would he f**k!

I’m not sure whether or not their respective networks prohibit commentators from having decisive opinions on anything controversial that happens during a game, but they sure seem to shirk the big ‘cheat’ calls often enough for it not to be a wide-spread personal conjecture.

They seem happy to foist little vignettes about their day (journey to the stadium/hotel) on us, but I have yet to see them take one of the glorious chances they are constantly presented with to publicly deplore the scheisters who are slowly but surely ruining football from it’s shiny façade inwards (another debate for another day).

I don’t want this rant to turn into a straightforward witch-hunt but I’m afraid it’s going to pretty much have to, not to illustrate any high-minded point, but to prevent me from having to go out on a strangling spree tonight to release all this freshly built-up tension.

I’m not, however, going to start pining for the days of Wolstenholme, Davies, Moore and even Motty back when he didn’t need a bib and a nappy. They were all consumate exponents in their time – but those times have now been and gone, so please allow me to address those who I feel need addressing…

“That balmy night in Barcelona”

And what better place to start than with Mr Clive Tyldesley?

Listening to Tyldesley commentate on a game is like sitting with a wasp in your ear for ninety minutes, especially if his beloved Manchester United are involved.

You can almost hear the saliva pooling in his huge, gormless Cro-Magnon mandible, as it hangs agog afore the mastery of his single-most favouritest club in the whole wide world, although I could’ve sworn that he is supposed to remain neutral… no? I just thought I remembered hearing that somewhere.

“Roy Keane is such a driving force! He’s a powerful man, I’ll tell you, there’s been a few times after questions when I’ve been reduced to stutters by a stare from Roy. He’s a strong man on and off the pitch! Those trophy-lifting fingers of Roy Keane’s are getting itchy. Hard man – hard to satisfy, hard to beat.”

Can a man not just express his love for a fellow man outright and leave it at that? You don’t have to go round the houses Clive; we all know what you want Roy to do with those trophy-lifting fingers.

Next up in the rogue’s gallery is one Peter Drury, ITV’s long-serving number two.

The one and only flaw (although it is quite a biggy) Mr Drury has to his name is the fact that the man just never… stops… spouting, presumably in a bid to prove that his intellect is a cut-above that of your average football commentator.

A good example came at the final-whistle of ‘little’ Fulham’s recent Europe League semi-final win over Hamburg, a victory that secured the Cottagers a place in the final. I’ll let the man himself do the honours…

What a monumental prick.

If his arcing ribbons of brain-jism alone weren’t enough, Drury often gets paired with Irish personality vacuum Jim Beglin (pronounced ‘Jum Buglin’), who I believe used to be head-steward at Liverpool in the mid-to-late 1980s or something like that.

Am I being too harsh? I just can’t tell anymore.

The man’s voice sounds like a bouncy castle deflating in the next room and, despite starting every sentence with the prefix “Listen…” as if what’s coming up is going to be a lesson in how to analyse and dissect a football match, he gets everything – and I mean everything, even the smallest, most insignificant details – completely and infallibly wrong.

Which leads me nicely on to my next bile-infused point…

For when those (very) rare occasions arise that the ‘numero uno’ is lost for words, or is busy composing himself for another epic verbose flourish, a co-commentator is employed to fill those ominously vacant airwaves with tedious ‘insight’ to sustain the viewers wavering concentration – after all, how the hell are us peons supposed to watch a game if we DON’T KNOW WHAT’S GOING ON?

We’ve already covered Beglin (though sadly not in three tonnes of concrete) so let’s move swiftly on to doddery old David Pleat.

Despite co-anchoring most of Five’s European games, Pleat, much like your grandfather, can’t pronounce any non-Anglo Saxon name correctly – just ask Pascal Chimbomba.

I don’t need to use any quotes or sources because you all know he does it, it’s common knowledge, a point d’humeur if you will – and it’s not bloody well good enough.

The various execs at Five really do need to find a quiet corner to quickly and humanely dispatch ‘old Pleaty’ in – putting him softly to sleep, like you would any other incontinent old loafer-clad Labrador.

I’m afraid I can’t bring myself to think about all the rest of the fly-by-nights that have tried their hands over the previous few years as I may start welling up again. However, a few of the worst offenders are the BBC’s Mark Bright (whose scrotum will seemingly explode if his speech rate drops below 50mph) and Five’s bumbling perma-dullard, ex-England manager Graham Taylor (the man who thought Carlton Palmer was a world class midfielder libero – need I say more?).

The Good (as opposed to The Bad and The Ugly)

There are, of course, many-a-fine exponent of the commentary art out there in television land to counter-balance the dingbats that have been mentioned so far.

Jonathan Pearce – although a bit of a Marmite figure himself – just about gets the right mix of passion and ‘stat-ssion’ (the passion of statistics), Steve Wilson is solid and unspectacular (a good mix, as it happens), Jon Champion is/was perfectly listenable and even Tony Gubba delivered the goods before he went all ‘sequins and leotards’ on us.

But these chosen few (along with a handful of others that I’d probably mention if I was a better journalist) – due to some unexplainable law of the cosmos – seem to command much less screen time than ubiquitous tossers like Tyldesley and Drury.

I guess you must have to pay a little bit more for quality.

Oh God yeah, I almost forgot the pundits! In fact, don’t get me started on pundits. Not yet.

(P.S. You may have noticed that the above article has a distinctly ‘terrestrial’ bias – this is because at no point in my life have I ever subscribed to Sky television, as just thinking about the repercussions of the resultant flood of bullsh*t has put me on the cusp of acute mental breakdown on numerous occasions.)